The Canadian dollar is steady in the Friday session, continuing the lack of movement seen on Thursday. Currently, is trading at 1.2870. In economic news, Canadian retail sales reports were mixed. improved to 0.6%, above the estimate of 0.3%. However, declined 0.2%, well off the estimate of 0.5%. There are no economic indicators in the U.S. on the schedule.

Negotiations over a new NAFTA agreement have failed to reach a conclusion, and the parties haven’t even reached an ‘agreement in principle.’ Although there is no official deadline to wrap up a deal, there are upcoming events that could mean that a deal won’t be made in 2018. Mexico holds general elections in June and the U.S. holds congressional mid-term elections in November. Meanwhile, the Trump administration has given both Canada and Mexico another 30-day exemption on steel and aluminum tariffs, lasting until June 1. Earlier in the week, U.S. Commerce Secretary Wilbur Ross said that further extensions could be granted, depending on the progress made in the NAFTA talks. Ottawa has demanded “full and permanent” exemptions from the tariffs, but may have to cough up more concessions in the NAFTA talks in order to convince Washington to exempt Canadian steel and aluminum imports from tariffs.

The U.S. economic picture continues to look bright. The Trump tax cuts and increase in government spending have boosted growth, and inflation is moving closer to the Federal Reserve target of 2 percent. These developments, although positive, have given rise to a policy debate in the Fed with regard to the pace of rate hikes. Earlier in the week, San Franciso Fed President John Williams said that only a few more hikes are needed before the economy can manage on its own without the Fed tightening or easing policy. This “neutral rate” policy is being disputed by other Fed policymakers, who believe that the U.S. economy has shifted into a higher phase, warranting rate cuts once economic indicators point to a hot economy. This split over monetary policy could intensify in the second half of 2018 if the economy continues to improve. 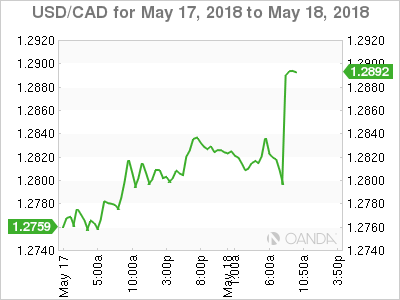 USD/CAD ratio is unchanged in the Friday session. Currently, short positions have a majority (53%), indicative of trader bias towards USD/CAD reversing directions and moving downwards.