The U.S. government shutdown has meant that the flow of economic data has been reduced. This has magnified the importance of the Beige Book, which was released on Wednesday. The report found that businesses across the country had become less optimistic, due to higher interest rates, swings in the financial markets and global trade tensions. At the same time, most of the regional Feds said that growth in their region was “modest to moderate.” The report reiterates the recent dovish stance we are seeing from the Federal Reserve, which has sent strong signals to the markets that rate hikes could be on hold for the near future.

Last week, the Bank of Canada lowered its growth forecast for 2019 to 1.7%, down from 2.1%. The bank also noted concerns over lower oil prices and the global trade war, both of which have hurt the economy. Still, the BoC expects economic activity to strengthen in the second half of the year, so it appears unlikely that the BoC will raise rates in the first quarter. An important factor in rate policy is the level of inflation, and investors are braced for a soft reading from CPI for December. CPI is expected to post a second successive decline of 0.4%. If inflation remains weak, the BoC will have an easier time holding off from rate cuts. 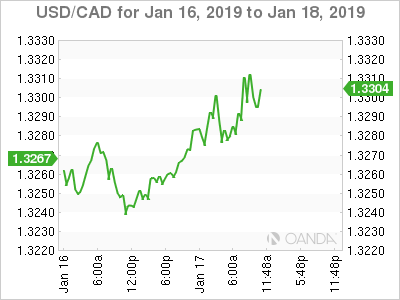 USD/CAD posted small gains in the Asian session and continues to move higher in European trade. The pair is steady in the North American session