has edged higher in the Tuesday session. Currently, the pair is trading at 1.3328, up 0.24% on the day and at its highest level since Jan. 7. On the release front, Canada publishes , which has posted two declines in the past three months. The estimate for the November release is -0.8%. In the U.S., the sole indicator is , which are expected to drop to 5.27 million. On Wednesday, Canada releases retail sales reports.

There was pessimistic news from the well-respected International Monetary Fund on Monday. The IMF revised downwards its global growth forecast. In October, the IMF projected growth of 3.7% percent, but this has been revised to 3.5 percent. IMF head Christine Lagarde said that the world’s economy continues to expand, but “it is facing significantly higher risks.” Canadian growth was also revised lower, to 1.9% down from 2.0% in October. Earlier in January, the Bank of Canada lowered its growth forecast for the economy, from 2.1% in October down to 1.7%. With the Canadian economy vulnerable to global trade tensions and lower oil prices, the Canadian dollar could hit some headwinds in early 2019.

Investors were greeted with weak data on Monday, as China released GDP numbers. The world’s second largest economy continues to expand, but GDP has been softening, pointing to an economic slowdown. China reported that GDP had slowed to 6.6% in 2018, marking its lowest level since 1990. GDP for the fourth quarter dipped to 6.4%, compared with 6.5% in the previous quarter. The soft GDP release comes on the heels of soft trade and manufacturing data. A decline in China could send the Japanese economy into recession, as the export and manufacturing sectors are heavily dependent on Chinese demand.

The Trump administration has threatened further tariffs if a deal is not reached by March 1, but a second round of negotiations between the sides is scheduled for the end of the month in Washington. Chinese officials will be under pressure to show more flexibility in the talks, in order to stem the economic bleeding. 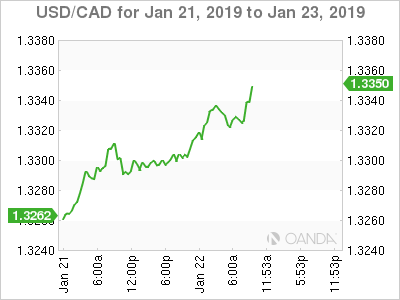