The Canadian dollar has lost ground in the Thursday session. In the North American trade, the is trading at 1.3340, up 0.30% on the day. On the release, U.S. unemployment claims climbed to 229,000, above the estimate of 225,000. Canadian declined 0.1%, after posting five straight readings of 0.0%. On Friday, the U.S. publishes the Empire State Manufacturing Index and UoM Consumer Sentiment, and Canada releases manufacturing sales.

Was the Bank of Canada too aggressive with its rate hikes? The bank raised rates five times between July 2017 and October 2018, but has since stayed on the sidelines. With the Canadian economy in a slowdown, the bank could stay on the sidelines until the second half of 2019. The sharp jump in rates may have been too much for the economy to handle. One sore spot is the housing sector, which has declined for five straight months, as higher rates have made mortgages more expensive and reduced home purchases. If the economy does not rebound, policy-makers will have to consider a rate cut, which could stimulate economic activity but would push the Canadian dollar downwards.

In the U.S., February consumer inflation numbers were soft, which means there is little pressure on policy-makers to raise rates in the near future. edged down to 0.1%, while CPI remained steady at 0.2%. Inflation remains well below the Federal Reserve’s target of 2.0 percent, so there is little pressure on the Fed to raise rates anytime soon. Policy-makers have been signalling that the Fed could stay on the sidelines until the second half of 2019, and this stance was underscored by Fed Chair Jerome Powell in a television interview earlier this week. Powell left no doubt about where the Fed stands, saying that the Fed would remain patient and was in no hurry to change interest rate policy. The dovish stance of the Fed could weigh on the greenback, as a lack of rate hikes makes the greenback less attractive to investors. 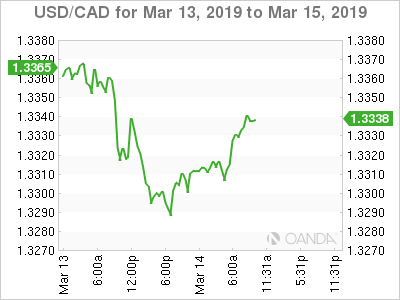