The Canadian dollar is showing little movement in the Friday session. Currently, is trading at 1.2655, down 0.13% on the day. On the release front, Canada releases key consumer data. is expected to dip to 0.4%. and are also forecast to post gains of 0.4%. There are no U.S. data releases on the schedule.

There were no surprises from the Bank of Canada on Wednesday, as the bank maintained the benchmark rate at 1.25 percent. The BoC was in cautious mode in the rate statement, noting that growth in the first quarter was weaker than the bank had forecast, but that it expected better news in the second quarter. The bank has some egg on its face, as in January it predicted growth of 2.5% for the first quarter, but has now revised the forecast to just 1.3% growth. Speaking after the statement, BoC Governor Stephen Poloz said that “the economy is in a good place,” but added that “interest rates are very low.” This is a clear signal that the BoC plans to raise rates in the near future, and many analysts are predicting a rate hike in July. Canada’s employment picture has been a bright spot, underscored by an excellent report on Thursday. As well, inflation has moved closer to the BoC’s target of 2 percent, making a rate hike likely in the next few months.

Continuing uncertainty over the future of the NAFTA trade agreement remains a major headache for the Bank of Canada. The protectionist U.S. administration has reopened the NAFTA agreement, threatening to walk away if its demands for major concessions in favor of the U.S. are not met. NAFTA is a crucial component of the Canadian economy, and the loss of NAFTA would be a nightmare for Canada. Ideally, the bank would prefer to hold off on a rate hike until the NAFTA issue is resolved. At the same time, the Federal Reserve is expected to raise rates at least twice more in 2018, and if the BoC does not increase rates, the Canadian dollar could fall sharply against a U.S. currency that would be more attractive to investors.

Where do we go from here ? 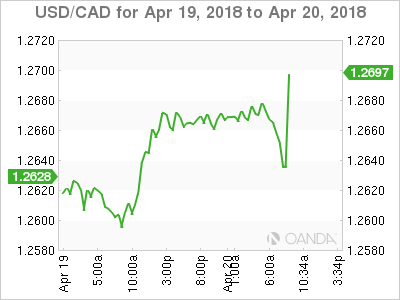