The Canadian dollar is showing limited movement on Monday. In the North American session, the pair is trading at 1.3269, up 0.02% on the day. On the release front, there are no Canadian or U.S. events on Monday, so is unlikely to see much movement during the day. On Tuesday, the U.S. releases reports and the .

It’s been an excellent start to 2019 for the Canadian dollar, which is up 2.7 percent in January. The currency has fully recovered the losses from December. An important catalyst for the Canadian dollar’s rally is the Federal Reserve’s dovish turn, which has reduced enthusiasm for the U.S. dollar. The minutes from the Fed’s December meeting, released Wednesday, noted that low inflation levels meant that the Fed could “afford to be patient about further policy firming.” Even more striking, the minutes revealed that at the December meeting, some policy-makers opposed a rate hike, arguing that inflation was too low to warrant higher rates. On Thursday, Fed Chair Jerome Powell said he was “very worried” about the massive U.S. debt and reiterated that the Fed would remain patient on monetary policy. Given that further interest rate hikes would hurt the debt burden of corporate borrowers, Powell’s remarks on the debt could be a sign that the Fed will take a pause on rate hikes in the near future, and perhaps even entertain a rate cut this year. The sharp U-turn on monetary policy by the Fed could continue to weigh on the U.S. dollar for the near future.

The Bank of Canada stayed on the sidelines last week, leaving the benchmark rate of 1.75% last week untouched. The bank’s policy statement was somewhat on the dovish side, as policy-makers highlighted their concerns for the economy. These included low oil prices, an overpriced housing market and the global trade war. The Canadian economy is highly dependent on exports, and a weaker global economy has put a crimp in the export sector. The loonie is sensitive to the movement in equity markets, and improved risk appetite in January has boosted the currency. The BoC remains cautious, and is likely to hold off on interest rate hikes until the current turmoil in the equity markets eases. 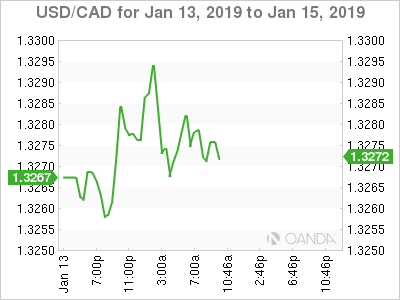 USD/CAD posted small losses in the Asian session but then recovered. This trend repeated itself in European trade