Canada is the host of the G7 meetings this year, and finance ministers from six countries were united in their criticism of U.S. Treasury Secretary Steve Mnuchin over a brewing trade war. Last week, the Trump administration imposed stiff tariffs on Canada, Mexico and the European Union. Canadian Prime Minister Justin Trudeau tweeted that the tariffs were “unacceptable” and said that Canada would “impose dollar-for-dollar tariffs for every dollar levied against Canadians by the U.S.” Canada will host the G7 leaders, and European leaders have made clear that they want the U.S. tariffs to be high on the agenda. If the trade battle escalates, Canada’s export-reliant economy could take a hit and drag down the Canadian dollar.

The on-again-off-again Korea nuclear summit is back on, complete with a starting time. The much-heralded meeting between U.S. President Donald Trump and North Korean President Kim Jong-un will take place in Singapore on June 12, at 9 a.m. sharp. The summit will mark the first-ever face-to-face meeting between leaders of the U.S.and North Korea, but Trump has tried to lower expectations, saying that he didn’t expect the sides to sign an agreement. Rather, the meeting would mark the start of a process. North Korea is unlikely to agree to denuclearization, but the fact that the two sides are talking is likely to continue boosting the stock markets. 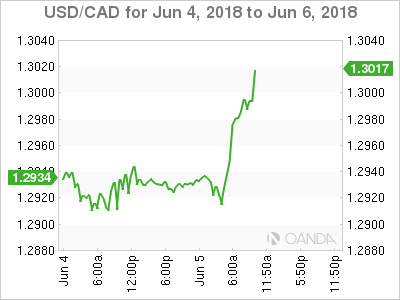 USD/CAD ratio is unchanged in the Tuesday session. Currently, long positions have a majority (62%), indicative of USD/CAD continuing to move higher.