The Canadian dollar is showing slight gains in the Friday session. Currently, is trading at 1.3276, down 0.30% on the day. On the release front, Canada will publish key consumer data. , the primary gauge of consumer spending, is expected to edge up to 0.4%. The markets are expecting mixed signals from retail sales reports. are expected to rebound to 0.5%, but retail sales is forecast to slip to 0.0%. There are no major events in the U.S.

The Canadian dollar is struggling, and June is likely to be the currency’s worst month since February. USD/CAD has gained 2.5% this month, as fears of a global trade war have soured investor appetite for minor currencies like the Canadian dollar. Canada is particularly vulnerable to protectionist moves by the United States, as some 80% of Canadian exports go to the U.S. A tight trading relationship between Canada and the U.S., anchored by the NAFTA agreement, hasn’t prevented U.S. President Donald Trump from imposing tariffs on Canadian steel and aluminum. With the NAFTA talks showing little sign of progress, Trump has threatened to impose tariffs of 25 percent on Canadian-built vehicles. Such a move would be disastrous for the Canadian automotive sector, which is worth some C$80 billion to the economy every year. The Trudeau government has promised to help sectors hit with U.S. tariffs, but bailing out the auto industry would cost billions. Canada may have to provide the U.S. with more concessions in the NAFTA negotiations, in order to stave off tariffs against Canadian vehicles, which could have a disastrous effect on economic growth.

Central bankers converged in Sintra, Portugal, this week, and the trade war between the U.S. and its trading partners was high on the agenda. The United States and the EU have slapped tariffs on each other, and Trump shook up global equity markets when he threatened to impose a 10-percent tariff on some $200 billion worth of Chinese goods. The heads of the central banks from the U.S and the European Union were united in the gloomy view of the trade conflict, with Federal Reserve Chair Jerome Powell saying that the changes in trade policy could force the Fed to “question its outlook.” ECB President Mario Draghi said that the trade spat could have negative consequences on monetary policy. If these protectionist measures force central banks to alter their monetary policy, this could have a significant impact on the currency markets. 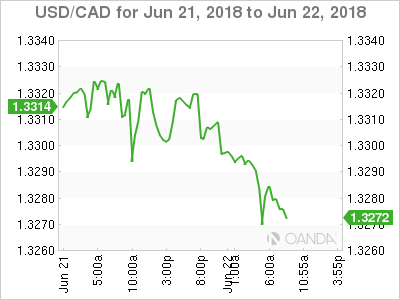