The Canadian dollar is showing little change in the Wednesday session. Currently, is trading at 1.3355, down 0.27% on the day. On the release front, Canadian Utilization Capacity Rate dropped for a second straight month, coming in at 82.6 percent. This missed the estimate of 85.8 percent. In the U.S., consumer inflation reports softened in November, but matched the estimates. CPI dipped to 0.0 percent and fell to 0.2 percent. On Thursday, Canada releases and the U.S. publishes unemployment claims.

Only a few months ago, the booming U.S. economy led to speculation that the Federal Reserve would continue raising rates in 2019, possibly up to four times. Since then, signs of a slowdown in the economy have caused the Fed to reassess its “gradual rate hike” policy, and many analysts are predicting just one rate hike next year. Three rate hikes so far this year have slowed economic growth, as seen by lower GDP readings and a dismal nonfarm payrolls report for November. Still, the Fed is widely expected to raise rates at the policy meeting on Dec. 19, with the CME setting the odds of a hike at 80 percent.

The Bank of Canada remains in caution mode, even after strong employment numbers on Friday. The economy created over 94,000 jobs, crushing the estimate of 10,100. As well, the unemployment rate dropped from 5.8 percent to 5.6 percent. However, all is not well with the economy, as GDP declined 0.1% in September, the second decline this year. The bank held interest rates at its policy meeting last week and is expected to do so again in January. 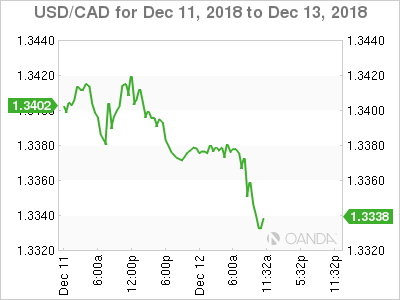 In the Asian session, USD/CAD ticked lower. The pair was flat in the European session and has posted small losses in North American trade