The Canadian dollar continues to trade quietly. Currently, is trading at 1.2563, down 0.22% on the day. In economic news, it’s a quiet end to the week. The U.S. releases , which is expected to soften to 100.6 points. We’ll also get a look at , which is forecast to fall to 6.11 million. There are no Canadian events on the schedule.

The Canadian dollar has looked sharp in the month of April, posting gains of 2.5 percent. However, there could be some headwinds around the corner, as the U.S. has threatened to attack Syria for an alleged chemical attack on the weekend. The situation has become further complicated as Russia has promised it will shoot down any U.S. missiles aimed at Syria. President Donald Trump had vowed that a strike was imminent, but has since backtracked, to the relief of the markets. Still, Trump is unpredictable, and if the U.S. carries out a military strike, panicky investors could dump minor currencies such as the Canadian dollar. Meanwhile, a fact-finding team from the Organization for the Prohibition of Chemical Weapons has arrived in Syria to attempt to verify if a chemical attack did indeed take place.

The had a generally hawkish tone, reflective of a solid U.S. economy. All of the Fed policymakers indicated that the U.S. economy would continue to improve and that inflation would rise in the next few months. At the March meeting, the Fed unanimously voted to raise rates by a quarter-point, bringing the benchmark rate to a range between 1.50% and 1.75%. The Fed projection for rate policy in 2018 remains at three hikes, although there is speculation that the Fed could revise the forecast to four rate hikes. Last week, Fed Chair Jerome Powell said the Fed would likely continue to raise rates in order to keep a lid on inflation, but added that the rate moves would be gradual. A new headache for the Fed is the escalating trade battle between the U.S. and China, which could hurt the economy and raise consumer prices. As for the next two rate meetings, the markets expect Powell & Co. to sit tight in May and raise rates at the June meeting. 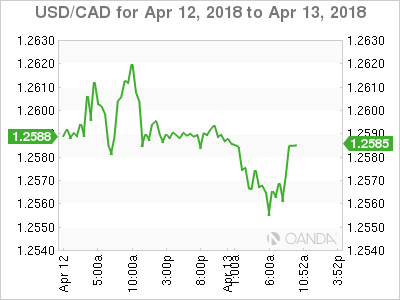 USD/CAD ratio is unchanged in the Friday session. Currently, long positions have a majority (57%), indicative of USD/CAD continuing to move lower.