The Canadian dollar continues to lose ground this week. On Tuesday, is trading at 1.3014, up 0.28% on the day. On the release front, there are no Canadian events. In the U.S., consumer inflation numbers were within expectations. CPI remained pegged at 0.2% and edged up to 0.2%, just above the forecast of 0.1%. On Wednesday, the U.S. will release PPI reports and the Federal Reserve is expected to raise interest rates to a range between 1.75% and 2.00%.

The leaders of the U.S. and North Korea met in a historic summit in Singapore on Tuesday. The joint statement put out by leaders was short on details, but President Donald Trump said that President Kim Jong-un had reaffirmed its full commitment to complete denuclearization of North Korea. Although the crucial issue of verification was not addressed, there’s no denying that tensions have significantly eased and that the summit could mark a first step in bringing peace to the Korean peninsula.

Canada could prove to be one of the big losers of the G7 debacle on the weekend, as the fault lines between Trump and the other six members were far worse than expected. Trump openly clashed with the other leaders over his recent tariffs against the European Union and Canada and pulled back his endorsement of the traditional post-summit statement put out by the other members. The undiplomatic Trump also tweeted that Canadian Prime Minister Justin Trudeau, who hosted the summit, was “dishonest and weak.” Canada and the EU are furious over recent U.S. tariffs, especially because Trump pushed them through on the basis of national security. The glaring cracks in G7 unity could cast a long shadow on trade relations between the U.S. and the “G6,” with business confidence and capital spending at risk if the tariff spat continues. This could spell trouble for the export-reliant Canadian economy. With about 80 percent of Canadian exports going to the United States, Canada can ill-afford a protracted trade war with its giant neighbor.

The Canadian dollar could face some headwinds on Wednesday, as the Federal Reserve holds its monthly policy meeting. The Fed is widely expected to raise the benchmark rate by a quarter-point, with a likelihood of 94%, according to the CME Group (NASDAQ:). Although the rate increase has been priced in, the Canadian dollar could still lose ground, as the rate hike will make the greenback more attractive to investors. 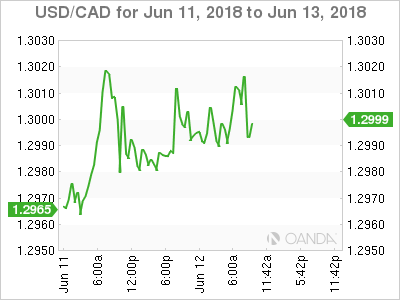 USD/CAD ticked higher in the Asian session and has posted slight gains in European trade.

USD/CAD ratio is showing little movement in the Tuesday session. Currently, long positions have a majority (63%), indicative of USD/CAD continuing to move higher.