The Canadian dollar is slightly higher in Wednesday trade. In the North American session, the is trading at 1.3314, down 0.18% on the day. On the release front, there are no Canadian events. In the U.S., this week’s employment data kicked off with . The release was dismal, falling to 129,000, down from 183,000 in the previous release. Later in the day, is expected to drop to 58.1 points. On Thursday, the U.S. releases unemployment claims and Canada posts Ivey PMI.

What can we expect from the Bank of Canada? Governor Stephen Poloz spoke earlier in the week, saying that global trade tensions are weighing on the Canadian economy. Poloz acknowledged that the slowdown has been worse than the BoC anticipated, but insisted that the economy will bounce back in the near future. At the same time, Poloz said that the bank intended to keep interest rates below the neutral range. This dovish stance has made the Canadian dollar less attractive to investors, and the currency could face further headwinds if economic data fails to improve.

The U.S. economy remains strong, but this week’s key numbers have been anything but impressive. The weak durable goods orders data comes on the heels of soft retail sales numbers for March. Retail sales declined by 0.2%, shy of the estimate of +0.3%. Core retail sales declined by 0.4%, a sharp drop from the 0.9% gain a month earlier. Both indicators posted a second decline in three months, which is bound to raise concerns about the strength of the economy. There are concerns that the economy could be slowing down – growth for the first quarter could be as low as 0.8% annualized, compared to 2.2% in the fourth quarter. 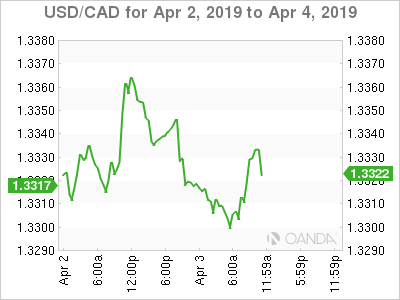 USD/CAD posted small losses in the Asian and European sessions