has posted gains in the Wednesday session, erasing the losses seen on Tuesday. Currently, the pair is trading at 1.3307, down 0.37% on the day. In Canada, retail sales data disappointed. dropped 0.9% in November, its weakest reading since April 2018. declined 0.6%, its sharpest drop since December 2017. There are no major U.S. events on the schedule. On Thursday, the U.S. releases unemployment claims.

There was pessimistic news on Monday from the International Monetary Fund on Monday, which revised downwards its global growth forecast. In October, the IMF projected growth of 3.7% percent, but this has been revised to 3.5 percent. IMF head Christine Lagarde said that the world’s economy continues to expand, but “it is facing significantly higher risks.” Canadian growth was also revised lower, to 1.9% down from 2.0% in October. Earlier in January, the Bank of Canada lowered its growth forecast for the economy, from 2.1% in October down to 1.7%. With the Canadian economy vulnerable to global trade tensions and lower oil prices, the Canadian dollar could hit some headwinds in early 2019.

Investors were greeted with weak data on Monday, as China released GDP numbers. The world’s second largest economy continues to expand, but GDP has been softening, pointing to an economic slowdown. China reported that GDP had slowed to 6.6% in 2018, marking its lowest level since 1990. GDP for the fourth quarter dipped to 6.4%, compared to 6.5% in the previous quarter. The soft GDP release comes on the heels of soft trade and manufacturing data. 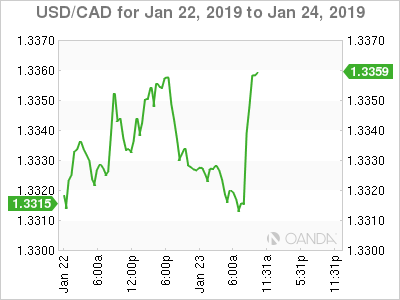 USD/CAD has posted small losses in the Asian and European sessions, The pair has ticked higher early in North American trade