The Canadian dollar has posted losses in the Thursday session. Currently, is trading at 1.3289, down 0.40% on the day. On the release front, there are no Canadian events. In the U.S., is forecast at 2.2%, identical to the reading of Preliminary GDP in May. As well, unemployment claims is expected to edge up to 220,000. On Friday, Germany releases retail sales and the eurozone publishes reports. The U.S. will publish consumer spending and inflation data, as well as consumer confidence.

Will he or won’t he? Investors are keeping a close eye on the Bank of Canada, which holds a policy meeting on July 11. The bank has strongly hinted that a rate hike could be coming soon. On Wednesday, BoC Governor Stephen Poloz had a hawkish message for the markets, noting that inflation was on target and the domestic economy was performing well. However, Poloz also mentioned that the trade war between Canada and the U.S. was hurting business investment. Currently, the likelihood of a rate hike in July is 55 percent. Canadian economic data in the next two weeks will likely be the determining factor as to whether the BoC presses the rate trigger, or opts to wait until later in the year.

As the second quarter draws to a close, the U.S. economy continues to perform well. Economic growth has been strong and the labor market is close to capacity. However, the trade war between the U.S. and its major partners could be the dark cloud on the horizon. The Federal Reserve now plans to raise rates four times in 2018 (up from three), but a global trade war could force the Fed to revise its forecast back to three hikes. On Tuesday, Atlanta Fed bank president Raphael Bostic said that if the trade war intensified, he would vote against a fourth rate hike, due to downside risks to the economy. Fed Chair Jerome Powell sounded pessimistic about the economic effects of trade tensions at an ECB forum earlier in June, and if other Fed members express concerns, the Fed could delay a fourth hike until 2019. 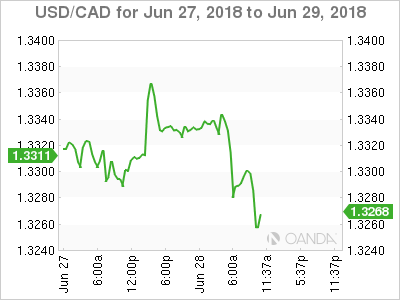