The Canadian dollar surged Monday. The is trading higher by 0.21 percent at 1.2992. The U.S. dollar lost traction earlier in the session with the release of the U.S. retail sales data for September. and were lower than the forecast and the loonie was boosted by the release of the .

Survey responses show Canadian business prospects are robust in the near term. Firms expect growth to pick up from domestic and foreign customers. The contrast of news between the USD and the CAD favoured the rise of the loonie. The Bank of Canada is highly anticipated to hike rates next week, and the optimistic view of businesses will validate the decision. 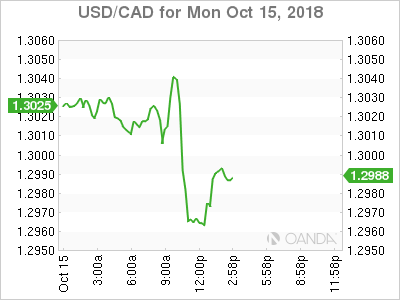 Oil prices are lower as supply concerns and geopolitics are driving energy prices at the moment. Gold is having a moment as it quickly reclaimed its title as a safe haven destination after the stock market sell off.

Trade concerns have eased after Canada was included at the last minute in the U.S.-Mexico-Canada trade deal, but global concerns have escalated. The U.S.-China trade dispute continues with no side giving an inch and now a missing journalist is putting pressure on Saudi Arabia, which does not take criticism lightly.

The Canadian dollar is starting the week on the right foot, but the positive trend will face the release of the notes from the September FOMC. The U.S. central bank hiked rates and is still expected by the market to do so again in December.