The Canadian dollar has posted considerable gains in the Wednesday session. Currently, is trading at 1.2986, down 0.66% on the day. On the release front, there are no Canadian indicators on the schedule. In the U.S., the current account deficit widened to $128 billion, above the estimate of $125 billion. On the housing front, is forecast to rise to 5.41 million. All eyes are on the Federal Reserve, which is expected to raise the to a range of between 1.50% and 1.75%. On Thursday, the U.S. releases .

A protectionist president in Washington continues to keep policymakers in Ottawa up late at night, as some 80% of Canadian exports head to its southern neighbor. The latest scare for Canada has been the U.S. decision to slap tariffs on steel and aluminum products, as Canada is the largest exporter of steel to the U.S. Canada avoided a bullet as President Donald Trump announced that the Canada and Mexico would be exempt from the tariffs, but the specter of the U.S. involved in trade wars has weighed on the fragile Canadian dollar. There was some positive news earlier on Wednesday, with a report that the U.S. has dropped its demand that vehicles produced in Canada or Mexico that are destined to the U.S. contain a minimum of 50% U.S. content. This demand was one of the key sticking points in the negotiations, and its removal should speed up talks on the renegotiated NAFTA agreement.

The markets are keeping a close eye on the Federal Reserve, which will release a rate statement later in the day. The Fed is expected to raise rates for the first time in 2018, and Fed Chair Jerome Powell will preside as chair of the FOMC for the first time, followed by Powell’s first post-FMOC press conference. The Fed has sounded marginally more hawkish recently – will this trend continue in the rate statement? The Fed rate projection remains at three rates for 2018, but with the US economy continuing to perform well, this forecast could be revised upwards to four rates. If the rate statement is unexpectedly hawkish, the US dollar could respond with gains. 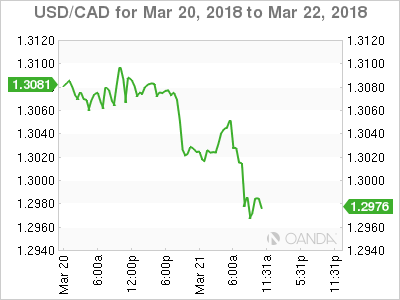 USD/CAD posted gains in the Asian session. In European trade, the pair moved higher but has reversed directions and has posted considerable losses

USD/CAD ratio is unchanged in the Wednesday session. Currently, short positions have a majority (64%), indicative of USD/CAD continuing to move lower.