The Canadian dollar has edged lower in the Tuesday session. Currently, is trading at 1.2872, down 0.32% on the day. There are no Canadian indicators on the schedule. In the U.S., is expected to dip to 55.2 points. On Wednesday, the U.S. releases and the .

The tariff battles have continued this week, with China firing the latest shot. On Monday, China responded to recent U.S. tariffs, imposing its own duties on a range of U.S. goods, including frozen pork and wines. This move is bound to escalate tensions between the two economic giants and has raised fears that a new global trade war could be underway. If the tit-for-tat measures continue, both the U.S. and Chinese economies could suffer, which could lead to a global slowdown. Gold is sensitive to geopolitical crisis, as investors tend to snap up safe-haven assets such as gold during times of uncertainty. If tensions worsen between China and the U.S., gold prices could continue to move upwards.

U.S. President Donald Trump is pushing hard for a NAFTA deal, and reportedly wants Canada and Mexico to sign the dotted line sometime in April. After months of bumpy negotiations, an agreement appears close. The U.S. had threatened to walk away from the talks if its demand were not met. There are some outstanding issues, such as the U.S. demand that all NAFTA-produced cars contain at least 50% U.S. content and Trump’s demand that Mexico pay for a wall on its border with the U.S. Canada and Mexico had expected the eighth round of negotiations to be held in Washington this week, but no invitation has been sent out from Washington. 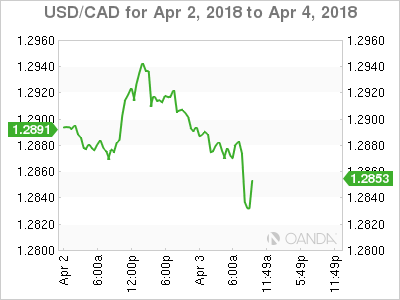 USD/CAD has ticked lower in the Asian and European sessions

USD/CAD ratio is unchanged in the Tuesday session. Currently, short positions have a majority (54%), indicative of USD/CAD continuing to move lower.