is unchanged in the Monday session. In the North American session, the pair is trading at 1.3280, up 0.02% on the day. On the release front, there are no Canadian or U.S. events. On Tuesday, the U.S. releases and Federal Reserve Chair Jerome Powell speaks at an event in Washington.

Canada’s labor market ended the week with an exclamation mark, as the economy created 66,800 jobs in January, crushing the estimate of 6,500. It was the second banner reading in three months. Still, the Bank of Canada is not expected to raise rates at its next meeting on March 6. Weak oil prices are weighing on inflation, and the Canadian dollar is down 1.1 percent in February. The BoC appears to have taken page out of the Federal Reserve’s playbook and is expected to ease monetary policy this year after aggressively raising rates in 2018. Last week, BoC Deputy Governor Tim Lane said that Canada’s fundamentals were strong and unemployment was at historically low rates. However, Lane noted that the Canadian dollar was under pressure due to lower oil prices, a soft housing market and a decline in business investment due to uncertainty over U.S. trade policies.

Investors remain apprehensive over the U.S.-China trade war. Although the sides are talking, markets slipped after President Donald Trump that he would not hold a meeting with President Xi Jinping prior to the March 2 deadline, when the U.S. is set to impose further tariffs if the sides fail to reach a deal. A third round of negotiations starts this week, with Treasury Secretary Steve Mnuchin joining the talks later in the week. Still, with no signs of progress, there is growing alarm that the sides will not be able to reach a deal by March 2. 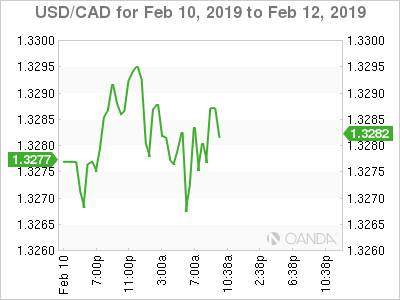 USD/CAD posted small gains in the Asian session and was steady in European trade.