The Canadian dollar continues to gain ground, and has inched higher in the Thursday session. Currently, is trading at 1.2891, down 0.10% on the day. On the release front, there are no Canadian data releases. In the U.S., rose to 229,000, higher than the forecast of 225,000. On Friday, the U.S. releases durable goods and housing reports.

It’s been a good week for the Canadian dollar, which has gained 1.6 percent against the greenback. This has erased most of last week’s losses. There has been some good news on the NAFTA front, as the U.S. appears to have softened its rigid negotiation position. The U.S. had demanded far-reaching concessions from Canada and Mexico, threatening to withdraw from NAFTA if its demands were not met. NAFTA is critically important for the Canadian economy, and the specter of the free-trade agreement being cancelled has weighed on the Canadian dollar for months. However, there was good news this week as the U.S. has dropped its demand that vehicles produced in Canada or Mexico that are destined to the U.S., contain a minimum of 50% U.S. content. This demand was one of the key sticking points in the negotiations, and its removal should speed up talks on the renegotiated NAFTA agreement. Another scare for Canadian policymakers was the U.S. decision to slap tariffs on steel and aluminum products, as Canada is the largest exporter of steel to the U.S. Canada avoided a bullet as President Donald Trump announced that the Canada and Mexico would be exempt from the tariffs, at least temporarily.

As widely expected, the Federal Reserve raised rates by a quarter-point on Wednesday, bringing the benchmark rate to a range between 1.50% and 1.75%. The markets were looking for any clues with regard to the pace of rate hikes in 2018 – currently the Fed is projecting three hikes, but a robust U.S. economy could push the Fed to press the rate trigger four times. The rate statement did not directly address the issue, but there was a refreshing lack of Fed-speak from policymakers, who said that “the economic outlook has strengthened in recent months.” This phrase has not been used in previous rate statements, and if Fed policymakers reiterate positive sentiment towards the economy, could push the U.S. dollar to higher ground. 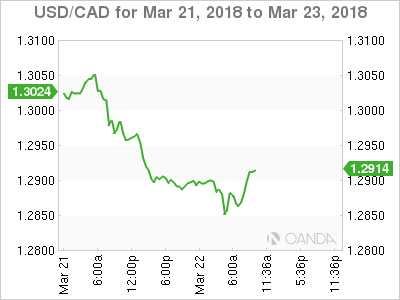