The Canadian dollar has posted strong gains this week, gaining 1.2 percent. In the Wednesday session, has risen 0.14% on the day. In economic news, there are no Canadian events on the schedule. It’s a busy day in the U.S., with the release of the and consumer inflation indicators. CPI is expected to dip to 0.0%, and is forecast to remain at 0.2%. As well, the FOMC releases the minutes of its March rate meeting. On Thursday, the U.S. publishes .

The Canadian dollar has flexed some muscle, but some serious headwinds could be around the corner. Syrian forces allegedly used chemical weapons against rebel positions last week, and a UN Security Council meeting ended inconclusively after Russia cast a veto on a U.S. proposal to prove the attack. U.S. President Donald Trump has warned that a U.S. response is on the way, and Russia has countered that it will respond to any U.S. move. If Trump makes good on his promise, investor risk appetite could sink and drag down minor currencies such as the Canadian dollar.

The Bank of Canada was released earlier this week. The survey pointed to a generally upbeat business sector and has helped boost the Canadian dollar. The survey found widespread intention by companies to increase investment and hiring, and “forward-looking sales indicators remain positive across most regions and sectors”. Still, the report is unlikely to change the current sentiment that the BoC will not raise rates at next week’s policy meeting.

The tariff spat between the U.S. and China appears far from over, but both sides have lowered the flames which has roiled the markets in recent weeks. Investors are breathing a sigh of relief after Chinese President Xi Jimping sent out a conciliatory message on Tuesday. Xi was speaking at a development conference in China, and promised to lower tariffs on vehicle imports into China. This has been a major sticking point between the U.S. and China, with Trump complaining that China has a 25% tariff on U.S. vehicle imports, yet the U.S. only charges 2.5% on Chinese vehicles. Xi added that China was looking to solve issues through dialogue rather than confrontation, and the markets are hoping that the U.S. and China can avert a trade war, which could drag down the global economy.

Xi is music to the markets ears 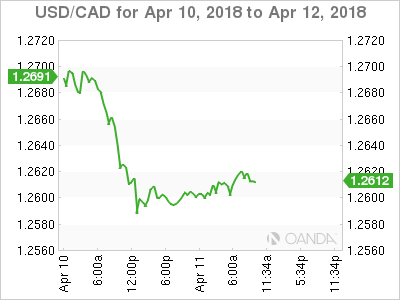