The downward spiral continues this week, as the Canadian dollar has lost more ground in the Thursday session. Currently, is trading at 1.3417, up 0.46% on the day. Earlier in the day, USD/CAD broke above the 1.34 level for the first time since June 2017.

In economic news, In the U.S., the spotlight will be on employment releases. ADP (NASDAQ:) non-farm payrolls is expected to drop to 195,000, down from 227,000 a month earlier. The strength of the ADP release could provide a clue regarding the official NFP report on Friday, which is also expected to drop sharply. Unemployment claims spiked last week at 234,000, but are forecast to drop to 224,000. Later, the is expected to dip to 59.1 points. In Canada, the trade deficit is expected to widen to C$0.7 billion. Elsewhere, OPEC members are meeting in Vienna for a second straight day. On Friday, Canada and the U.S. release key employment indicators, highlighted by U.S. non-farm payrolls.

As expected, the Bank of Canada stayed on the sidelines and left the benchmark rate at 1.75%. There were a number of factors in favor of the bank staying on the sidelines. The escalating trade war between the U.S. and China has hurt the Canadian export sector, and oil prices have dropped in recent weeks. Domestically, GDP declined 0.2% in September, the first drop since January. As well, the Federal Reserve has hinted that it will reduce the number of rate hikes in 2019, which has eased pressure on the BoC to raise rates.

It’s been a dismal week for the Canadian dollar, which is down 1.0%. The downward spiral has mirrored movement in the global stock markets. Equities started the week with gains, but this proved to be short-lived, as investor optimism following the Trump-Xi meeting quickly dissipated. At the start of the week, the Canadian dollar jumped after U.S. President Donald Trump and Chinese President Xi reached an agreement, whereby the U.S. agreed to suspend further tariffs until March 1. However, investors have sobered since, wondering if the 90-day truce is simply a pause in the trade war between the world’s two largest economies. the two super-economies remain far apart on a number of issues, including U.S. accusations that China has been stealing U.S. intellectual property. All indications are that reaching a deal will be difficult. The markets have been sensitive to development in the tariff tussle between the countries, and the likely ups-and-downs in the upcoming negotiations will likely affect market movement in the coming weeks. 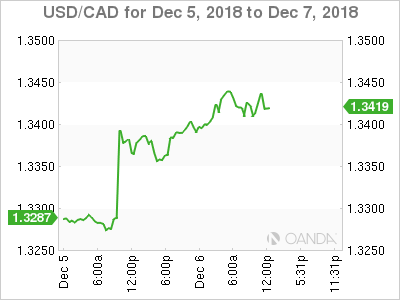 USD/CAD continues to break through resistance levels. In the Asian session, the pair ticked lower but then rebounded and moved higher. The pair has posted slight gains in the European session