The Canadian dollar has steadied in the Wednesday session, after suffering sharp losses on Tuesday. is trading at 1.3292, down 0.07% on the day. On the release front, Canadian declined 0.5%, marking its third decline in four releases. In the U.S., remained pegged at 0.1%, shy of the estimate of 0.4%. Durable goods orders were dismal, with a sharp decline of 4.4%, compared with the estimate of -2.2%. This was the sharpest drop since August 2017. On Thursday, Canada releases corporate profits and the Bank of Canada financial system review.

A sharp fall in technological stocks on Wednesday sent the Canadian dollar reeling. A staggering trillion dollars were wiped off the balance sheets, and investors responded by dumping risk assets like the Canadian currency. USD/CAD jumped 1.03% on Wednesday, as the pair punched above the 1.33 level for the first time since late June. The nagging U.S.-China trade dispute has taken a bite out of both economies, and investors are concerned that the conflict will dampen the current economic expansion. Both the Jones and indices gave up their year-to-date gains, and further corrections in global equity markets could mean more headwinds for the wobbly Canadian dollar.

There had been hopes that the U.S. might ease up on the rhetoric against China, but those hopes were dashed on Sunday, at an Asian-Pacific summit in Papua New Guinea. The meeting ended in discord, with leaders unable to agree on a final communique. U.S. Vice President Mike Pence, who headed the U.S. delegation, was blunt in his remarks, saying that China would have to drastically change its trade practices before the U.S. would remove current tariffs on $250 billion in Chinese goods. 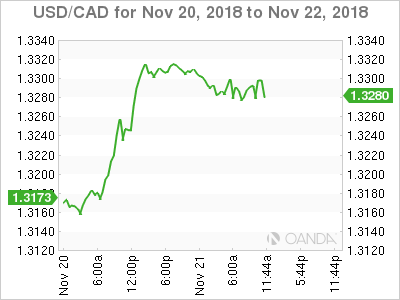