The Canadian dollar continues to lose ground in the Friday session, after strong gains on Thursday. Currently, is trading at 1.3129, up 0.18% on the day. Earlier in the day, the Canadian currency dropped to its lowest level since June 2017. On the release front, is expected to fall to 0.6%. In the U.S., the is forecast to drop to 19.1 points. We’ll also get a look at UoM Consumer Confidence, which is forecast to soften to 98.5 points.

As widely expected, the Federal Reserve raised interest rates by a quarter-point, to a range between 1.75 percent and 2.00 percent. Fed Chair Jerome Powell sounded hawkish in his press conference, saying that the economy was performing well and that “overall outlook for growth remains favorable.” This message echoed the rate statement, in which policy-makers said that “economic activity has been rising at a solid rate,” pointing to stronger consumer spending and business investment. What may have been the most notable development was that the Fed rate projections were revised upwards, predicting two additional rate hikes in 2018, for a total of four hikes. Until now, the Fed had projected three rate hikes this year. This represents a nod to the strength of the U.S. economy and could boost the dollar against its rivals.

Prime Minister Justin Trudeau is still smarting from the disastrous G7 summit, which he hosted. Canada, along with other members of the G7, vociferously complained about the tariffs which Trump imposed on Canada and the European Union. The summit ended in disarray, with Trump labelling Trudeau “weak” and “dishonest.” The meeting exposed fault lines between Trump and the other leaders over trade, and Trump’s protectionist stance could spell trouble for the Canadian economy and send the wobbly Canadian dollar even lower. Trump is expected to impose further tariffs on China as early as Friday, which has lowered risk appetite and weighed on the Canadian currency. Meanwhile, negotiations to update the NAFTA agreement are deadlocked, with Canada unhappy about a U.S. demand for a sunset clause after five years, which would require the parties to hammer out a new agreement. Mexico is holding general elections on July 1, and a left-wing candidate, Andrés Manuel López Obrador, leads in the polls. If López Obrador becomes president, it could mean more complications for the NAFTA talks. 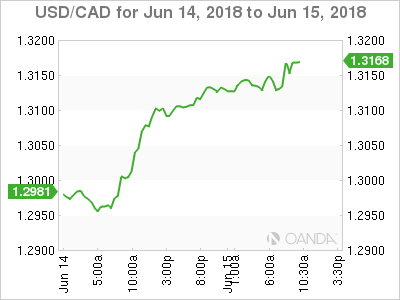 USD/CAD ratio is showing gains in long positions in the Friday session. Currently, long positions have a majority (71%), indicative of USD/CAD continuing to move higher.