The Canadian dollar has lost ground in Friday’s North American session, erasing the losses seen earlier in the day. Currently, is trading at 1.3120, up 0.15% on the day. On the release front, key Canadian consumer indicators declined in September. dropped by 0.4%, weaker than the estimate of -0.1%. declined by 0.4%, missing the estimate of 0.1%. missed the forecast of 0.1%, with a reading of -0.4%. In the U.S., there are no key releases. is expected to drop to 5.29 million.

Employment numbers are important leading indicators of consumer spending, and there was good news on Thursday, ahead of key Canadian retail sales reports on Friday. jumped 28,800 in September, up from 13,600 a month earlier. Will Friday’s dismal consumer numbers affect the Bank of Canada’s plan to raise rates next week? The markets are still expecting the BoC to raise rates by a quarter-point, which would mark the third rate increase in 2018. With Canada, the U.S. and Mexico about to enter the USMCA, which replaces the NAFTA pact, the last obstacle for the BoC on the path to normalization has been removed and analysts are now expecting three rate hikes in 2019, up from a forecast of two hikes just a few months ago.

The U.S. dollar was broadly higher on Thursday, after a hawkish tone from the Federal Reserve minutes. The minutes indicated that a majority of members want to continue raising interest rates until the U.S. economy shows signs of slowing down. However, the duration of a tighter policy remains unclear, as the minutes noted that “there is considerable uncertainty surrounding all estimates of the neutral federal funds rate.” This would likely be around the 3-percent level, which will not be reached until the second half of 2019, as the Fed has indicated it will raise rates three times next year. At the September meeting, the Fed removed the phrase “the stance of monetary policy remains accommodative”, which was considered outdated, given the policy of steady rate hikes. As rates approach the “neutral rate”, we could see further changes in language at upcoming policy meetings. 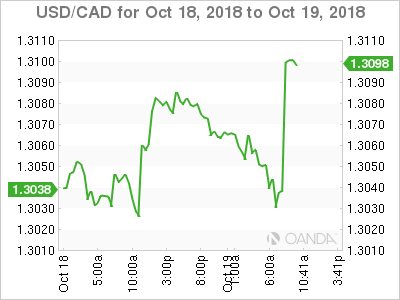 USD/CAD posted has ticked lower in the Asian session and has recorded stronger losses European trade. The pair has reversed directions in the North American session and posted strong gains