The U.S. received a GDP report card on Thursday, and the results were good. Advance GDP, which was released a month late due to the government slowdown, showed a gain of 2.6% in Q4. Although this was weaker than the 3.4% gain in Q3, it was well above the estimate of 2.2%. The unexpectedly solid reading can be credited to strong consumer spending and business investment. It’s hard to argue that the U.S. economy is not performing well, with a strong expansion of 3.1% in 2018. Even with the GDP release, it’s unlikely that the Federal Reserve will veer from it dovish stance.

It is Canada’s turn on Friday, with the release of GDP for December. Recent numbers have not been encouraging. The economy has declined by 0.1% in the past two months, and recent retail sales reports also pointed lower. The Bank of Canada hiked rates three times last year, but has since stayed on the sidelines, with the benchmark rate pegged at 1.75%. Inflation levels remain weak, as CPI posted a small gain of 0.1% in January, after two successive declines. With inflation well below the BoC’s target of 2%, it’s unlikely that the bank will raise rates unless the Canadian economy shows clear signs of improvement. 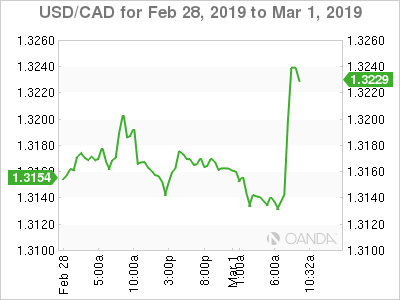 USD/CAD was flat in the Asian session and has posted small gains in European trade. The pair has recorded strong gains early in North American trade