The Canadian dollar has started the day with losses. On Monday, is trading at 1.3004, up 0.62% on the day. In economic news, it’s a very quiet start to the week. There are no Canadian indicators, and the sole U.S. event is the 10-year bond yield. On Tuesday, the U.S. releases reports.

The markets were braced for a bumpy meeting between the Group of Seven leaders on Friday, but the sharp disagreements between U.S. President Donald Trump and the other six members were far worse than expected. Trump openly clashed with the other leaders over his recent tariffs against the European Union and Canada and pulled back his endorsement of the traditional post-summit statement put out by the other members. The undiplomatic Trump also tweeted that Canadian Prime Minister Justin Trudeau, who hosted the summit, was “dishonest and weak.” Canada and the EU are furious over recent U.S. tariffs, especially because Trump pushed them through on the basis of “national security.” The glaring cracks in G7 unity could cast a long shadow on trade relations between the U.S. and the “G6,” with business confidence and capital spending at risk if the tariff spat continues.

There are only a handful of key Canadian indicators this week, but that won’t necessarily translate into an uneventful week for the Canadian dollar. The Federal Reserve will hold a policy meeting on Wednesday and a rate hike is a virtual certainty, with odds of a quarter-rate hike at 94%. Although the increase has been priced in, the Canadian dollar could still lose ground, as the rate hike will make the greenback more attractive to investors.

All eyes were on last week’s election in Ontario, the most populous province in Canada. Although there was a sharp shift to the right, the Canadian dollar yawned and continued to hug the symbolic 1.30 level. The Conservatives won a decisive majority of seats, as the business sector sighed in relief. With the Conservatives and the left-wing NDP running neck-and-neck in the polls, there had been concerns that the NDP could win the election, or at least deny the Conservatives a majority. The new premier, Doug Ford, is a former businessman and investors can expect the new government to have a pro-business platform. This should translate into gains for Canadian stock markets as well as the Canadian dollar. 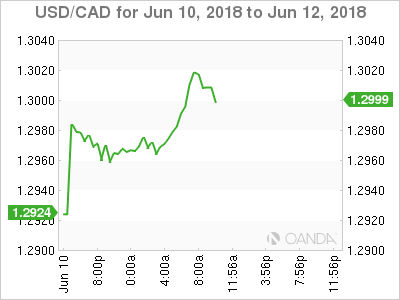 USD/CAD ticked lower in the Asian session and has edged higher in European trade.

USD/CAD ratio is showing little movement in the Monday session. Currently, long positions have a majority (61%), indicative of USD/CAD continuing to move higher.