The Canadian dollar is trading sideways in the Monday session. Currently, is trading at 1.3183, up 0.05% on the day. On Friday, the pair broke above the 1.32 line for the first time since June 2017. On the release front, there are no major events on the schedule. On Tuesday, the U.S. releases and .

The Canadian currency continues to look vulnerable after U.S. President Donald Trump imposed further tariffs on some $50 billion of Chinese products on Friday. China has promised to retaliate against U.S. imports, as trade ties between the world’s two largest economies continue to deteriorate. With the U.S. recently slapping tariffs on Canadian steel and the NAFTA talks in pause mode, it is no wonder that investor anxiety has risen. If the trade war between the U.S. and its partners continues to escalate, the big losers could be export-reliant economies, such as Canada. With some 80% of Canadian imports heading to the U.S., Canada can ill-afford a trade spat with its giant neighbor. With Trump showing no hesitation about slapping tariffs on Canadian steel and threatening further tariffs against Canada, the wobbly Canadian dollar could continue to head lower.

Prime Minister Justin Trudeau is still smarting from the disastrous G7 summit, which he hosted. Canada, along with other members of the G7, vociferously complained about the tariffs which Trump imposed on Canada and the European Union. The summit ended in disarray, with Trump labelling Trudeau “weak” and “dishonest.” The meeting exposed fault lines between Trump and the other leaders over trade. Meanwhile, negotiations to update the NAFTA agreement remain deadlocked, with Canada unhappy about a U.S. demand for a sunset clause after five years, which would require the parties to hammer out a new agreement. Mexico is holding general elections on July 1, and a left-wing candidate Andrés Manuel López Obrador leads in the polls. If López Obrador becomes president, it could mean more complications for the NAFTA talks. 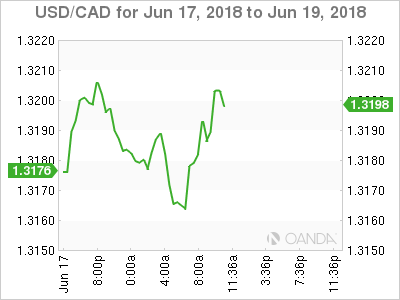 In the Asian session, USD/CAD edged higher but then retracted. In European trade, the pair recorded slight losses but has recovered