The Canadian dollar has recorded considerable losses in the Friday session. Currently, is trading at 1.3144, up 0.55% on the day. On the release front, there are no Canadian events for a second straight day. In the U.S., there are two key indicators. Advance GDP for Q3 impressed with a strong gain of 3.5%, beating the estimate of 3.3%. As well, is forecast to drop to 98.9 points.

The Canadian dollar has recorded three straight weekly losses, and it appears that this week will follow the same negative trend. Despite the Bank of Canada raising interest rates earlier in the week, the Canadian dollar continues to lose ground against the strong greenback, as USD/CAD has moved higher on Friday. It’s been a rough October for the Canadian currency, which has declined 1.85 percent.

As widely expected, the BoC raised the benchmark rate on Wednesday by a quarter-point, to 1.75%. The BoC gave the economy high marks, while at the same time noting that lower oil prices and the U.S.-China trade dispute could dampen economic growth. BoC Deputy Governor Carolyn Wilkins noted that even with the increase, rate policy remains “accommodative”, as the “neutral rate” stance won’t be reached until rates are between 2.5% and 3.5%. As the move was priced in, the Canadian dollar could only muster slight gains on Wednesday. Still, the currency has posted modest gains this week, after recording three straight weekly losses. Geopolitical hotspots continue to weigh on investor risk appetite, which has weighed on the Canadian dollar, a minor currency. Trouble spots include the spike in Italian bond yields, the Brexit impasse and the U.S.-China trade war. Domestically, however, the situation is bright, and the BoC will be looking at further interest rates in order to boost inflation while ensuring that the strong Canadian economy does not overheat. 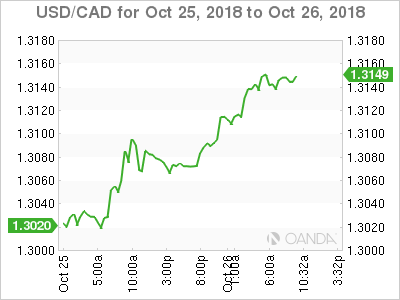