The Canadian dollar has steadied on Thursday, after considerable losses on Wednesday. Currently, the pair is trading at 1.3427, down 0.11% on the day. On the release front, U.S. jobless claims are expected to hold steady at 225,000. In Canada, are expected to plunge 4.6%, after two straight gains. On Friday, the focus will be on employment numbers on both sides of the border. is expected to gain a negligible 300, while the U.S. releases wage growth and . Traders should be prepared for some movement from in the Friday session.

As expected, the Bank of Canada stayed on the sidelines and maintained the benchmark rate at 1.75%, where rates have been pegged since October. The rate statement was dovish, as policymakers dropped a reference to rates rising over time. Instead, the bank said that the economy will continue to require stimulus and said that there was “increased uncertainty” about future rate hikes. The pessimistic language is a result of the economic slowdown, which has been worse than the bank anticipated. The BoC’s dovish tone has reinforced market expectations that the bank will not raise rates in the near future, and could lower rates if the economy continues to weaken. Canada’s contracted by 0.1% in November and December, and another decline could send the Canadian dollar even lower. Elsewhere, Canadian dropped sharply to 50.1 in January, down from 54.7 a month earlier. The soft reading points to a weakness in the Canadian economy.

The U.S.-China trade war has weighed on the global economy and caused significant volatility in the equity markets. Now that trade tensions have eased between the two super-economies, investor risk appetite has improved. If progress continues and the sides ink an agreement, traders can expect the markets to climb sharply. An agreement between the U.S. and China would be good news for the Canadian economy, which is heavily reliant on its export sector. 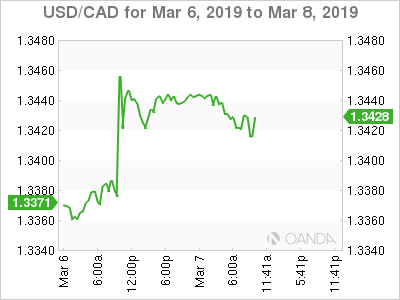