The Canadian dollar has edged lower in the Wednesday session, after recording strong gains on Tuesday. Currently, is trading at 1.2837, up 0.24% on the day. There are no Canadian indicators on the schedule. In the U.S., climbed to 241,000, crushing the estimate of 208,000. Later in the day, we’ll also get a look at , which is forecast to drop to 59.0 points. On Thursday, the U.S. releases and Canada will publish .

The tariff spat between China and the U.S. continues, and the growing possibility of a global trade war could be devastating for the Canadian economy, which is heavily reliant on exports. The Chinese government has fired the latest salvo, announcing 25% tariffs on 106 American products, including soy beans, wheat and some motor vehicles. The value of these U.S. exports amounts to some $50 billion – the same value as Chinese exports that have been slapped with tariffs by President Donald Trump. This represents a significant raising of the stakes, and has the markets worried. China’s deputy finance minister has said that a trade war between the two sides would be a ‘lose-lose,’ and few investors would disagree with his diagnosis. However, neither Trump nor Chinese President Xi Jinping has blinked so far, and the crisis shows no signs of being resolved anytime soon. As one U.S. analyst wrote this week, “trade wars are easy to start but hard to stop.”

After months of arduous negotiations, is a NAFTA agreement within reach? Trump has been pushing hard for a renegotiated NAFTA, and had threatened to walk away from the talks if his demands were not met. There are some outstanding issues still on the table, such as the U.S. demand that all NAFTA-produced cars contain at least 50% U.S. content and Trump’s demand that Mexico pay for a wall on its border with the U.S. Still, negotiators have sounded cautiously optimistic, and a report earlier this week said that the U.S. was pressing for an announcement of agreement-in-principle at next week’s Summit of the Americas in Peru. The Canadian dollar has been under pressure over lingering uncertainty with regard to NAFTA, and a new deal could boost the Canadian currency. 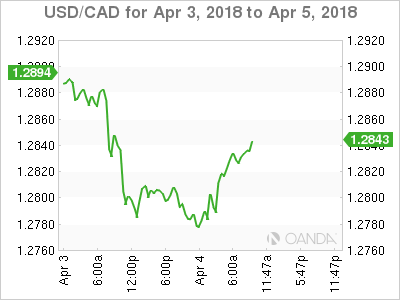 USD/CAD ratio is unchanged this week. In the Wednesday session, short positions have a majority (54%), indicative of USD/CAD reversing directions and moving lower.