The Canadian dollar has ticked lower in Friday trading. Currently, is trading at 1.3075, down 0.11% on the day. On the release front, it’s a quiet start to the trading week. The sole U.S. event is , which is expected to jump to $12.2 billion. On Tuesday, Canada releases and , and the U.S. will publish .

Canada’s economy created 31,800 jobs in June, well above the estimate of 22,300. This follows two straight declines. Wage growth also looked strong, as hourly earnings gained 3.5% in June on an annualized basis. At the same time, the unemployment rate climbed to 6.0%, above the estimate of 5.8%. Last week, Bank of Canada Governor Stephen Poloz said that the July rate decision on Wednesday would be based on economic data, and Friday’s strong job creation data will be added ammunition in favor of raising rates at the upcoming meeting.

U.S. employment data was a mix on Friday, as job growth remained above the 200,000 level, but wage growth faltered. Non-farm payrolls dropped to 213,000, but this beat the estimate of 195,000. edged lower to 0.2%, shy of the estimate of 0.3%. There was a surprise as the unemployment rate climbed to 4.0%, above the forecast of 3.8%. The data demonstrates that the U.S. labor market remains strong, and the economy continues to perform well. The markets remain bullish on U.S. growth, despite uncertainty in Europe and elsewhere, as well as the growing threat of an all-out trade war between the U.S. and China.

USD/CAD showed little response to the FOMC minutes, which were released on Thursday. The minutes were somewhat dovish in tone, as policy-makers gave a thumbs-up to the strong U.S. economy, but expressed concern about developments abroad. These include growing trade tensions with U.S. trading partners, as well as political and economic developments in Europe. The minutes also reiterated the Fed’s support for a “gradual” raise in interest rates. The markets are circling the September policy meeting for the next rate hike, with the CME Group (NASDAQ:) setting the odds of a quarter-point hike at 80%. 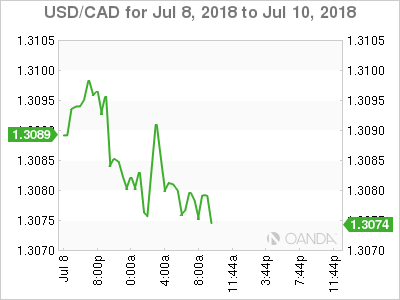