The Canadian dollar has ticked higher in the Friday session. Currently, is trading at 1.3068, down 0.08% on the day. On the release front, there are no Canadian indicators on the schedule. In the U.S., gained 4.1% in the second quarter, just shy of the estimate of 4.2%. This marked the strongest quarter of economic growth since 2014. Later in the day the U.S. releases , which is forecast to drop to 97.1 points.

Investors remained worried about the prospect of a full-blown trade war, as the U.S. and its trading partners have in engaged in a tariff battle. However, the mood last week was one of “reconciliation” rather than “retaliation,” at least between the U.S. and the European Union. A meeting between EU Commission President Jean-Claude Juncker and U.S. President Donald Trump was successful, as the two leaders agreed to take concrete steps to eliminate tariffs and improve the trade relationship between the U.S. and the EU, which has been battered in recent weeks. Trump agreed to hold back on any further tariffs while talks are ongoing. This is a major concession from Trump, who just last week had threatened to impose tariffs on European car imports. The agreement with the Europeans showed some surprising flexibility on the part of Trump, and Canadian policy-makers are hoping that the conciliatory U.S. stance will extend to the NAFTA negotiations with Canada and Mexico. The U.S. has insisted on far-reaching changes to the pact, including its renegotiation in five years. If its demands aren’t met, the Trump administration has said it could pursue separate free-trade agreements with Canada and Mexico. However, the latter two countries would like to maintain a trilateral arrangement. If the parties do reach a new agreement, the Canadian dollar would likely move higher.

The Canadian dollar posted strong gains on Wednesday, following an Energy Information Administration (EIA) report that showed a huge decline of 6.1 million in inventories. This is the second decline in three months, and was much higher than the estimate of 2.6 million. Growing tensions between Iran, on the one hand, and the U.S. and Saudi Arabia, on the other, have also raised concerns about oil supplies, and higher crude prices have boosted the Canadian dollar. 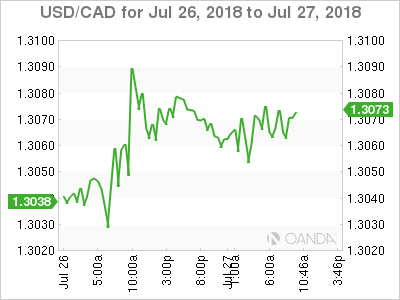