The markets had priced in a rate hike from the Federal Reserve on Wednesday, and the Fed didn’t disappoint. The central bank raised interest rates by a quarter-point, to a range between 1.75 percent and 2.00 percent. Fed Chair Jerome Powell sounded hawkish in his press conference, saying that the economy was performing well and that “overall outlook for growth remains favorable.” This message echoed the rate statement, in which policy-makers said that “economic activity has been rising at a solid rate,” pointing to stronger consumer spending and business investment. What may have been the most notable development was that the Fed rate projections were revised upwards, predicting two additional rate hikes in 2018, for a total of four hikes. Until now, the Fed had projected three rate hikes this year. This represents a nod to the strength of the U.S. economy and could boost the dollar against its rivals.

Trade negotiators on both sides of the border could use a tip or two from soccer officials, as the joint bid from the United States, Canada and Mexico won the right to host the 2026 World Cup on Wednesday. Such cooperation is only wishful thinking on the trade front, as the three countries remained deadlocked over the NAFTA agreement, notably over the U.S. demand to increase the U.S. content of cars produced in Canada or Mexico. A new headache for negotiators could be the Mexican national elections on Aug. 1, with a leftist candidate, Andrés Manuel López Obrador, holding a comfortable lead at the polls. If Obrador wins the election, a new NAFTA deal could prove even more elusive, which could be bad news for the Canadian dollar. 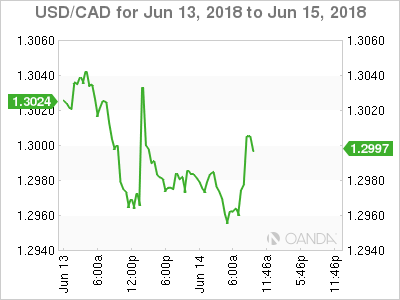 USD/CAD was flat in the Asian session and has edged lower in European trade.

USD/CAD ratio is unchanged in the Thursday session. Currently, long positions have a majority (63%), indicative of USD/CAD continuing to move higher.