The Canadian dollar continues to have an uneventful week. In the Wednesday session, is trading at 1.3316, up 0.10% on the day. On the release front, the sole Canadian event is a speech from Bank of Canada Governor Stephen Poloz. In the U.S., the focus is on durable goods orders. orders are expected to drop to 0.5%, while is forecast to drop 0.9%, which would mark a second straight decline. On Thursday, the U.S. will publish for the first quarter and .

As the second quarter draws to a close, the U.S. economy continues to perform well. Economic growth has been strong and the labor market is close to capacity. However, the trade war between the U.S. and its major partners could be the dark cloud on the horizon. The Federal Reserve now plans to raise rates four times in 2018 (up from three), but a global trade war could force the Fed to revise its forecast back to three hikes. On Tuesday, Atlanta Fed bank president Raphael Bostic said that if the trade war intensified, he would vote against a fourth rate hike, due to downside risks to the economy. Fed Chair Jerome Powell sounded pessimistic about the economic effects of trade tensions at an ECB forum earlier in June, and if other Fed members express concerns, the Fed could delay a fourth hike until 2019.

The Bank of Canada has dropped hints that it is ready to raise rates in the second half of 2018, but policy-makers have concerns both internally and on the global stage. The escalating trade war between the U.S. and China could have serious repercussions for the Canadian economy. President Donald Trump hasn’t spared Canada from tariffs, and with 80% of Canadian exports headed to the U.S., Canada can ill-afford a trade spat with its giant southern neighbor. On the domestic front, Canadian consumer inflation and spending data was softer than expected. was dismal, with a sharp drop of 1.2 percent. Despite these soft numbers, the BoC remains confident about the economy, and a July rate hike remains a reasonable possibility. Inflation is still above the target of 2.0%, and in its May policy statement the BoC removed its reference to “cautious,” replacing it with “gradual” describing its approach to rate adjustments. The markets viewed this as a signal that the bank is preparing to press the rate trigger. A rate hike would likely boost the Canadian dollar, as it makes the currency more attractive to investors. 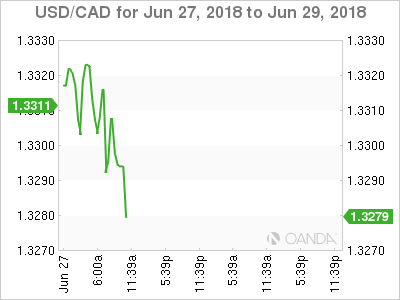