The Canadian dollar continues to have a quiet week. In Tuesday’s North American session, is trading at 1.3319, up 0.19% on the day. On the release front, there are no Canadian events until Thursday, so U.S. indicators will have an added impact on the movement of USD/CAD. In the U.S., the key event is , which is expected to drop to 127.6 points. On Wednesday, the U.S releases durable goods reports.

The Bank of Canada has dropped hints that it is ready to raise rates in the second half of 2018, but policy-makers have concerns both internally and on the global stage. The escalating trade war between the U.S. and China could have serious repercussions for the Canadian economy. U.S. President Donald Trump hasn’t spared Canada from tariffs, and with 80% of Canadian exports headed to the U.S., Canada can ill-afford a trade spat with its giant southern neighbor. On the domestic front, Canadian consumer inflation and spending data was softer than expected. was dismal, with a sharp drop of 1.2 percent. Despite these soft numbers, the Bank of Canada remains confident about the economy, and a July rate hike remains a reasonable possibility. Inflation is still above the target of 2.0%, and in its May policy statement the BoC removed its reference to “cautious,” replacing it with “gradual” describing its approach to rate adjustments. The markets viewed this as a signal that the bank is preparing to press the rate trigger. A rate hike would likely boost the Canadian dollar, as it makes the currency more attractive to investors.

There is widespread concern among central bankers that recent protectionist moves could hamper global growth and financial stability. This was the message on Sunday from the Bank of International Settlements (BIS), which acts as an umbrella group for some 60 central banks. The BIS also warned that the escalating trade war could have negative side effects on the currency markets. At the same time, the BIS expressed support for the Federal Reserve raising interest rates gradually and for the ECB heading towards normalization as it winds up its massive asset program. 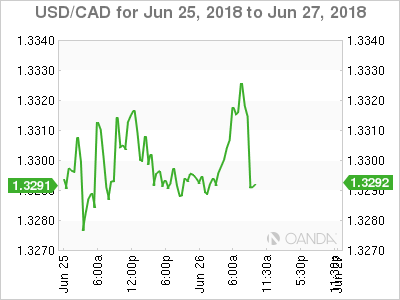