has ticked higher in the Thursday session. Currently, the pair is trading at 1.3347, up 0.03% on the day. On the release front, there are no Canadian events for the remainder of the week. In the U.S., today’s key event was , which dropped to 199,000, beating expectations.

There was good news from the U.S. labor market, as unemployment claims dropped sharply, from 213,000 to 199,000. This was the first time that the indicator dropped below the 200,000 level since 1969. The four-week average, which is less volatile, dropped by 5,500 to 215,000. The strong figures indicate that the employment picture remains bright, despite the ongoing U.S. government shutdown, which has resulted in the layoff of some 800,000 government workers.

With the global trade war showing no signs of easing, it is no surprise that growth forecasts for 2019 are heading south. On Tuesday, the International Monetary Fund lowered its global and eurozone growth forecasts. In October, the IMF projected global growth of 3.7% percent, but this has been revised to 3.5 percent. IMF head Christine Lagarde said that the world’s economy continues to expand, but “it is facing significantly higher risks.”

As for Canada, the IMF downgrade was slight, from the October forecast of 2.0% to the current forecast of 1.9%. In December, the Bank of Canada also lowered its growth forecast, from 2.1% in October to 1.7%. The lower forecasts underscore the vulnerability of the Canadian economy to the U.S.-China trade war and falling oil prices. The Canadian dollar has performed well in January, with gains of 2.1%, but there could be headwinds ahead for the Canadian dollar. 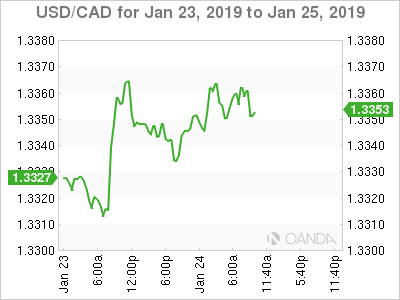 USD/CAD ticked lower in the Asian session but recovered. The pair has posted small gains in European trade