has posted small gains in the Monday session. Currently, the pair is trading at 1.3298, up 0.23% on the day. There are no U.S. or Canadian events on the schedule, so traders can expect limited movement from the pair during the day. On Tuesday, Canada releases for November, which has posted two declines in the past three months.

The Chinese economy continues to show signs of an economic slowdown. The world’s second largest economy continues to expand, but a downward trend has made investors nervous. On Monday, China reported that GDP had slowed to 6.6% in 2018, marking its lowest level since 1990. GDP for the fourth quarter dipped to 6.4%, compared with 6.5% in the previous quarter. The soft GDP release comes on the heels of soft trade and manufacturing data, pointing to a slowdown due to the ongoing U.S.-China trade war. The Trump administration has threatened further tariffs if a deal is not reached by March 1, but a second round of negotiations between the sides is scheduled for the end of the month in Washington. Chinese officials will be under pressure to show more flexibility in the talks, in order to stem the economic bleeding. Investor risk appetite has been strong in January, and that has been a major boost for the Canadian dollar, which has improved 2.5% this month and erased the December losses. However, if China continues to post soft data, investor confidence could nosedive and push the Canadian dollar lower.

The week ended on a positive note, as Canada’s headline inflation improved to 2.0% in December, on an annualized basis. This matches the BoC inflation target. Core inflation is at 1.9%, but weak wage growth continues to be a downside risk on inflation. After an aggressive 2018, the BoC is expected to remain on the sidelines and maintain interest rates in the first half of 2019, which could dampen enthusiasm towards the Canadian dollar. 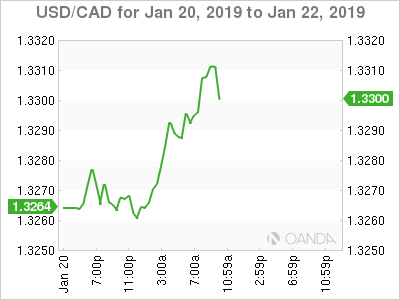