The Canadian dollar remains close to the 1.31 level. In the Tuesday session, is trading at 1.3121, down 0.08% on the day. On the release front, is expected to tick lower to 0.3%. In the U.S., voter participation is expected to be heavy in the mid-term congressional elections. As well, the U.S. releases . On Wednesday, Canada releases .

All eyes are on the U.S. mid-term elections, with voters deciding who will control Congress. Many analysts are calling the election a referendum on the presidency of Donald Trump, who has presided over a red-hot economy but has also alienated many voters with his controversial policies on health care and immigration. There are a host of races that are too close to call, but most analysts expect the Democrats to narrowly win the House while the Republicans will hold onto their majority in the Senate. Traders should expect some volatility in the currency markets once the results are announced.

Canada released October employment data on Friday, and the releases were positive. The economy added 11,200 jobs in October, although this was shy of the estimate 12,700. The unemployment rate ticked lower to 5.8%, a shade better than the forecast of 5.9%. These numbers will likely increase the likelihood of a rate hike from the Bank of Canada in early December. The economy is doing well and the BoC is also mindful that the Federal Reserve is expected to raise rates again in December, which would mark a fourth rate hike in 2018. Policy-makers do not want to see divergence widen between U.S. and Canadian rates, and another rate hike from the BoC would be bullish for the Canadian dollar. 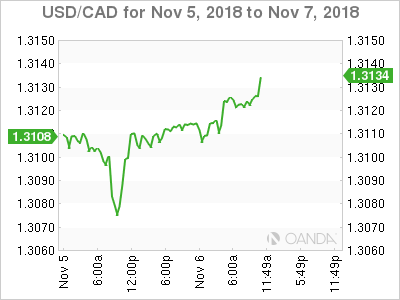