The Canadian dollar has posted losses in the Monday session. Currently, is trading at 1.3190, up 0.32% on the day. On the release front, it’s a quiet start to the week, with no Canadian indicators. The U.S. releases , which is expected show little change. On Tuesday, the U.S. releases and .

The simmering trade dispute between the U.S. and China shows no signs of being resolved anytime soon, which does not bode well for minor currencies like the Canadian dollar. An Asia-Pacific Economic Cooperation summit in Papua New Guinea ended in discord on Sunday, with leaders unable to agree on a final communique. U.S. Vice-President Mike Pence, who headed the U.S. delegation, was blunt in his remarks, saying that China would have to drastically change its trade practices before the U.S. would remove current tariffs on $250 billion in Chinese goods.

In the U.S., consumer inflation and spending numbers were strong in October. On Thursday, the U.S. released retail sales reports. Retail sales rebounded with a strong gain of 0.7% in October, after a decline of 0.1% a month earlier. Core retail sales jumped 0.8%, after a gain of 0.1% in September. There was good news from the inflation front on Wednesday, as U.S. consumer inflation numbers beat their estimates for October. The consumer price index posted a gain of 0.3%, its strongest gain since January. , which excludes food and energy prices edged higher to 0.2%, marking a 3-month high. Both releases were in line with forecasts. Core CPI was 2.1% higher than a year ago. The solid consumer data means that the Fed remains on track to continue raising interest rates. The Federal Reserve holds its next policy meeting in December, with the odds of a December rate hike at 69%, slightly lower compared to last week. 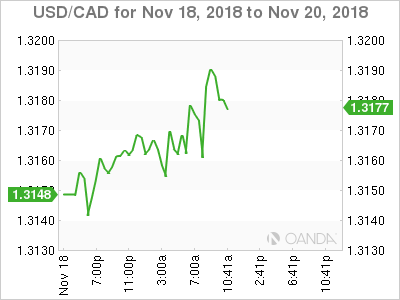 USD/CAD posted small gains in the Asian and European sessions. The pair has followed this trend in North American trade