The Canadian dollar has started the week quietly. Currently, is trading at 1.2604, down 0.08% on the day. In economic news, the U.S. releases key consumer sales reports. are expected to improve to 0.4%, after two straight declines. is forecast to remain unchanged at 0.2%. On Tuesday, the U.S. releases and .

It was a dramatic weekend, as a U.S.-led strike destroyed several chemical installations in Syria. Predictably, Syria and Russia strongly condemned the attack, but are unlikely to retaliate despite the rhetoric. The markets had already priced in an attack, and are hopeful that Trump’s declaration of “mission accomplished” means that things will remain relatively quiet in Syria. However, further chemical attacks by the Syrian regime could trigger a response from the U.S. and its allies, which could result in volatility in the markets, and minor currencies like the Canadian dollar would likely take a hit.

The Canadian dollar has looked sharp in the month of April, posting gains of 2.5 percent. However, there could be some headwinds around the corner, as the U.S. has threatened to attack Syria for an alleged chemical attack on the weekend. The situation has become further complicated as Russia has promised it will shoot down any U.S. missiles aimed at Syria. Trump had vowed that a strike was imminent, but has since backtracked, to the relief of the markets. Still, Trump is unpredictable, and if the U.S. carries out a military strike, panicky investors could dump minor currencies such as the Canadian dollar. Meanwhile, a fact-finding team from the Organization for the Prohibition of Chemical Weapons has arrived in Syria to attempt to verify if a chemical attack did indeed take place. 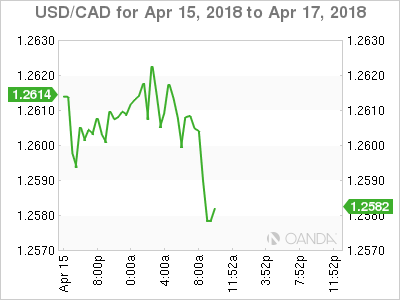 USD/CAD was flat in the Asian session. The pair edged higher in European trade but has retracted

USD/CAD ratio is almost unchanged in the Monday session. Currently, long positions have a majority (58%), indicative of USD/CAD reversing directions and moving higher.