The Canadian dollar has posted small gains in the Friday session. Currently, is trading at 1.2919, down 0.14% on the day. On the release front, it’s a busy day on both sides of the border. Canada will release key consumer spending and inflation data. is expected to fall to 0.4%. and are expected to post gains of 0.9% and 1.1%, respectively, after both posted declines in the previous releases. In the U.S., durable goods reports are expected to rebound after posting declines in January. is expected to rise 0.5%, and durable goods orders is forecast to climb 1.6%. On the housing front, is expected to improve to 621,000.

Canada is heavily dependent on exports, so the specter of a global trade war could be disastrous for the Canadian economy. There is considerable worry in Ottawa, as U.S. President Donald Trump seems intent on “righting wrongs” in U.S. trade balances by applying the hedge hammer of tariffs. On Thursday, U.S. Trump slapped 25% tariffs on up to $60 billion worth of Chinese imports. For its part, China wasted no time in threatening to retaliate, saying it was planning to impose tariffs on 128 U.S. products, which amounted to $3 billion in imports. The tariffs directed against China come on the heels of tariffs on steel imports coming into the U.S., although the U.S. has exempted Canada and some other countries. There is serious concern that these moves could ignite a global trade war, and a downturn in the Chinese economy could spread and cause a global recession.

A major headache for Canadian policymakers is the NAFTA trade agreement, which the U.S. has insisted at reopening and inserting more favorable terms for the U.S. Otherwise, the Trump administration has threatened to withdraw from NAFTA. The specter of the free-trade agreement being cancelled has weighed on the Canadian dollar for months. However, there was good news this week as U.S. has dropped its demand that vehicles produced in Canada or Mexico, destined to the U.S., contain a minimum of 50% U.S. content. This demand was one of the key sticking points in the negotiations, and its removal should speed up talks on the renegotiated NAFTA agreement. The positive shift in negotiations has boosted the Canadian currency.

As widely expected, the Federal Reserve raised rates by a quarter-point on Wednesday, bringing the benchmark rate to a range between 1.50% and 1.75%. The markets were looking for any clues with regard to the pace of rate hikes in 2018 – currently the Fed is projecting three hikes, but a robust U.S. economy could push the Fed to press the rate trigger four times. The rate statement did not directly address the issue, but there was a refreshing lack of Fed-speak from policymakers, who said that “the economic outlook has strengthened in recent months.” This phrase has not been used in previous rate statements, and if Fed policymakers reiterate positive sentiment towards the economy, could push the U.S. dollar to higher ground.

China is not backing down, and why should they ? 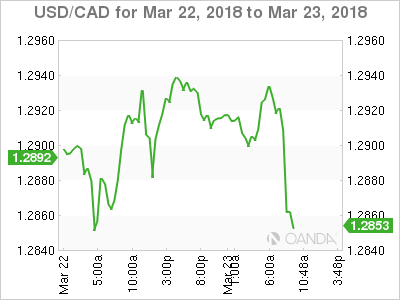 USD/CAD ratio is unchanged in the Friday session. Currently, short positions have a majority (57%), indicative of USD/CAD continuing to move lower.