The Canadian dollar is slightly lower in the Monday session. Currently, is trading at 1.3291, up 0.19% on the day. On the release front, there are no Canadian releases until Thursday. In the U.S., is expected to climb to 665,000. On Tuesday, the U.S. releases .

Canadian consumer data was dismal on Friday, but the Canadian dollar managed to hold its own against the greenback. in May slipped to a weak gain of 0.1%, missing the forecast of 0.4%. This marked a 5-month high. Consumer spending in April also missed expectations. declined 0.1%, well off the estimate of 0.5%. The indicator hasn’t posted a gain since January. declined 1.2%, compared to an estimate of 0.0%. This was its weakest reading since February 2016. Despite the soft numbers, the BoC remains confident about the economy, and a July rate hike remains a reasonable possibility. Inflation is still above the target of 2.0%, and in its May policy statement the BoC removed its reference to “cautious,” replacing it with “gradual” describing its approach to rate adjustments. The markets viewed this as a signal that the bank is prepared to press the rate trigger in the second half of 2018. A rate hike would likely boost the Canadian dollar, as it makes the currency more attractive to investors.

The escalating trade dispute between the U.S. and its major trading partners remains a critical issue for global markets. The heads of central banks are concerned, and last week, Jerome Powell and Mario Draghi sounded gloomy about the repercussions that a trade war could have on economic growth and monetary policy. On Sunday, the Bank of International Settlements (BIS), also weighed in. The BIS acts as an umbrella group for some 60 central banks. The head of the BIS, Augustin Carstens, warned that recent protectionist moves could hamper global growth and financial stability, and could have negative side effects on the currency markets. At the same time, the BIS expressed support for the Federal Reserve raising interest rates gradually and for the ECB heading towards normalization as it winds up its massive asset program. 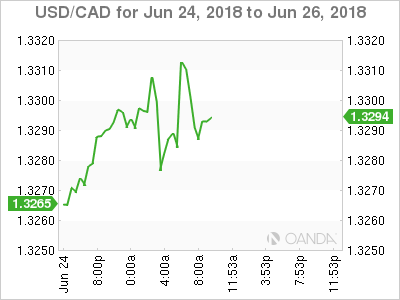