The Canadian dollar has flexed some muscle this week, but the minor currency could face some turbulence, as the markets are braced for a U.S. strike against Syria. This follows an alleged chemical attack by Syrian forces against rebels, and a UN Security Council meeting ended inconclusively after Russia cast a veto on a U.S. proposal to probe the attack. U.S. President Donald Trump has warned that a U.S. response is imminent, while Russia has countered that it will respond to any U.S. move. Matters could get very nasty if Trump makes good on his promise, as investor risk appetite could sink and drag down minor currencies such as the Canadian dollar.

There were no surprises in the , but the generally hawkish tone has helped support the U.S. dollar. All of the Fed policymakers indicated that the U.S. economy would continue to improve and that inflation would rise in the next few months. At the March meeting, the Fed unanimously voted to raise rates by a quarter point, bringing the benchmark rate to a range between 1.50% and 1.75%. The Fed projection for rate policy in 2018 remains at three hikes, although there is speculation that the Fed could revise the forecast to four rate hikes. Last week, Fed Chair Jerome Powell said that the Fed would likely continue to raise rates in order to keep a lid on inflation, but added that the rate moves would be gradual. A new headache for the Fed is the escalating trade battle between the U.S. and China, which could hurt the economy and raise consumer prices. As for the next two rate meetings, the markets expect Powell & Co. to sit tight in May and raise rates at the June meeting.

The Bank of Canada was released earlier this week. The survey pointed to a generally upbeat business sector and has helped boost the Canadian dollar. The survey found widespread intention by companies to increase investment and hiring, and “forward-looking sales indicators remain positive across most regions and sectors”. Still, the report is unlikely to change the current sentiment that the BoC will not raise rates at next week’s policy meeting. 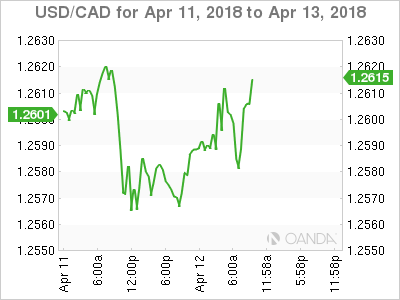 USD/CAD ticked higher in the Asian session. In the European session, the pair posted slight gains but has retracted

USD/CAD ratio is almost unchanged in the Thursday session. Currently, long positions have a majority (57%), indicative of USD/CAD reversing directions and moving lower.