The Canadian dollar has edged lower in the Tuesday session. Currently, is trading at 1.2550, down 0.14% on the day. There are key events on both sides of the border. Canadian is expected to rebound strongly with a gain of 1.0%. In the U.S., the focus is on construction numbers. are expected to rise to 1.33 million, and are forecast to improve to 1.27 million. The markets will be listening closely as three FOMC members deliver speeches.

The Bank of Canada will be in focus on Wednesday, with the release of the new . The markets are expecting the bank to stay on the sidelines and hold rates at 1.25 percent. A quarter-point rate hike is expected in the near future, most likely in May or June. The BoC has overestimated the country’s growth, as the economy has fallen well short of the bank’s forecast of 2.5% expansion in the fourth quarter of 2017 and the first quarter of 2018. In actuality, GDP expanded 1.7% in Q4 and is expected between 1.5% – 2.0% in the first quarter. The NAFTA trade agreement remains a primary concern, as Canadian negotiators hope they can nail a new agreement with an unpredictable U.S. administration.

Syria remains a geopolitical hotspot after a U.S.-led missile strike destroyed three chemical weapons sites on the weekend. Predictably, Syria and Russia strongly condemned the attack, with Russian President Vladimir Putin warning that the attack would lead to global “chaos”. Still, a Russian response is unlikely, despite the strong rhetoric. Investors did not show much reaction to the attack, as the markets had already priced in a strike. After the weekend attack, President Donald Trump declaration of “mission accomplished” means that things will remain relatively quiet in Syria. However, further chemical attacks by the Syrian regime could trigger a response from the U.S. and its allies, which could result in volatility in the markets, similar to what occurred last week. If tensions are reignited, traders can expect minor currencies like the Canadian dollar could head lower. 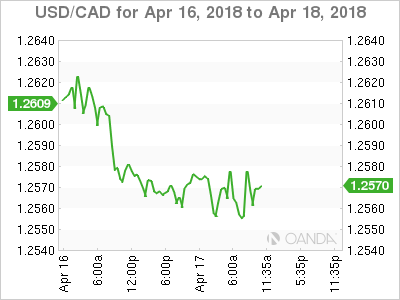 USD/CAD edged higher in the Asian session. The pair has been choppy in European trade

USD/CAD ratio has shown negligible movement this week. Currently, long positions have a majority (59%), indicative of USD/CAD breaking out and moving higher.