The Canadian dollar has steadied in the Monday session, after sharp losses on Friday. Currently, the is trading at 1.3306, up 0.07% on the day. It’s a quiet start to the week, with no Canadian events and one minor event in the United States. On Tuesday, the U.S. releases .

The Canadian dollar slipped almost 1 percent on Friday, after a soft report. In December, the economy contracted by 0.1% for a second straight month. The economy was stagnant in Q4, with a negligible gain of 0.1%. For all of 2018, the economy expanded 1.8%, shy of the BoC target of 2.0%. The Bank of Canada has said that it expected the economic slowdown to be temporary, but a sluggish Q4 is raising concerns about the health of the economy. The BoC hiked rates three times last year, and this may have hurt consumer spending, which was weak in the fourth quarter. With economic growth headed in the wrong direction and inflation levels below the BoC target of 2.0%, BoC policymakers are unlikely to raise interest rates in the near term.

In the U.S., Friday’s numbers were a disappointment. declined 0.5%, its first decline in almost three years. The ISM Manufacturing PMI fell to 54.2, short of the estimate of 55.6 points. As well, improved to 93.8, but still missed the forecast of 95.8 points. The focus will be on employment numbers this week, starting with ADP (NASDAQ:) nonfarm payrolls on Wednesday. 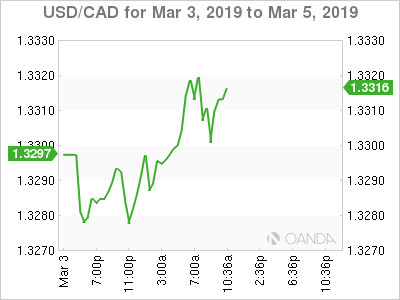