USD/CAD: Canadian Dollar Under Pressure As NAFTA Talks Heat Up

The Canadian dollar has lost ground on Friday, continuing the trend seen on Thursday. In the North American session, Currently, is trading at 1.3049, up 0.53% on the day. On the release front, Canadian posted a strong gain of 0.7%, above the estimate of 0.0%. In the U.S., the key event is , which is expected to drop to 95.5 points.

Investors are glued to the NAFTA talks, as Canadian and U.S. negotiators are scrambling to reach an agreement before a Friday deadline (which may have to be extended). The U.S. and Mexico reached an agreement earlier in August, leaving Canada out in the cold, much to the annoyance of Canadian policy-makers. If Canada and the U.S. can hammer out an agreement, this would pave the way to a new NAFTA pact being signed by all three countries. The stakes are enormous, with some $1 trillion in trade between the three countries under the current NAFTA agreement. Canada will likely have to make some concessions, such as reducing hefty tariffs which protect the Canadian dairy industry. Still, Canadian equity markets have been on the rise, as investors remain confident that a NAFTA 2.0 deal can be reached.

The trade spat between the U.S. and China may have take a pause, but investors remain jittery. The trade war has taken a bite out of Chinese exports, as the “new export order” subindex in China’s official PMI dropped below 50 in August, the third straight month that the index has contracted. U.S. President Donald Trump has threatened to slap additional tariffs on some $200 billion of Chinese products, a move that could take place as early as next week. Further tariffs would have a damaging effect on the Chinese economy, and it’s likely that China would respond in kind. The current trade spat has already seen the U.S. dollar gain ground against rivals such as the euro, and fears of a global trade war could see the greenback make further gains. 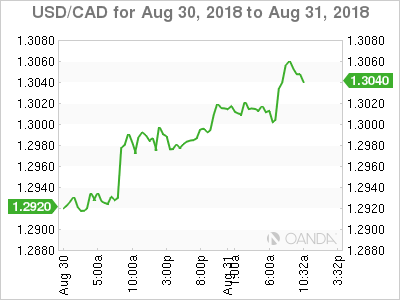