The Canadian appreciated versus the U.S. dollar on Tuesday after the stronger than expected monthly report. The Canadian economy expanded at a 0.5 percent rate in May versus the anticipated 0.3 percent. The higher annual pace of growth came in at 2.6 percent and has increased the possibility of another rate hike this year, appreciating the loonie versus the greenback on the North American trading session. Oil prices fell below $70 as the U.S. dollar recovered with the announcement of new trade talks between the U.S. and China. 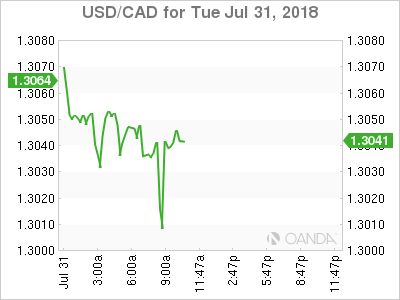 The is flat after the strong Canadian data has been cancelled out by the announcement of lower trade tension between China and the United States. The currency pair touched a session low of 1.3010 at 8:30 a.m., but is now back at 1.3031 after sources indicated that U.S. Treasury officials and China Vice Premier representatives intend to meet.

The NAFTA and EU-U.S. trade conversation both had positive sound bites this week. The incoming Mexican president was eager for a quick NAFTA renegotiation and he was echoed by the Trump administration. Canada and Mexico made sure to be clear that a trilateral negotiation is needed as the U.S. has been pushing for two bilateral sit downs.

Yesterday, U.S. Commerce Secretary Wilbur Ross said that NAFTA talks are close to a deal, specially with Mexico. The latest strategy by the U.S .has been to move faster on talks with its southern neighbour with a new incoming government. Mexico and the U.S. will hold ministerial talks on Thursday in Washington. Canadian officials tried to be part of the meeting but were rejected by the U.S.