It continues to be an uneventful week for the Canadian dollar, and the trend has continued on Friday. Currently, is trading at 1.3007, up 0.17% on the day. In economic news, Canada will release key employment data. Employment Change is expected to rebound with a gain of 19.1 thousand and the unemployment rate is forecast to remain pegged at 5.8%. There are no major U.S events on the schedule.

All eyes were on the Ontario election on Thursday, and although there was a dramatic shift in the political landscape, the Canadian dollar yawned and continued to hug the symbolic 1.30 level. The Conservatives won a decisive majority of seats, as the business sector sighed in relief. With the Conservatives and the left-wing NDP running neck-and-neck in the polls, there had been concerns that the NDP could win the election, or at least deny the Conservatives a majority. The new premier, Doug Ford, is a former businessman and investors can expect the new government to have a pro-business platform. This should translate into gains for Canadian stock markets as well as the Canadian dollar.

Prime Minister Justin Trudeau will play host to the G-7 meeting in Quebec City, which begins on Friday. However, the embraces and smiles could be a formality ahead of some heated discussions, as the summit comes at a time of escalating trade tensions between the U.S and some of its major trading partners. Last week, finance ministers from six members of the G-7 were united in their criticism of US Treasury Secretary Steve Mnuchin over the brewing trade war. The trouble started last week, when the Trump administration slapped stiff tariffs on Canada, Mexico and the European Union. This resulted in promises of retaliation, and Canada and Mexico have already announced duties on U.S products. Will we see a higher profile, repeat performance at this meeting? The escalating trade battle is sure to dominate the summit, where Trump can expect to hear strong complaints from other leaders over the tariffs, which Trump justified on the grounds of ‘national security’. If the leaders fail to resolve matters, the result could be a nasty trade war between the U.S and its major trading partners.

Dollar in demand ahead of G6+1 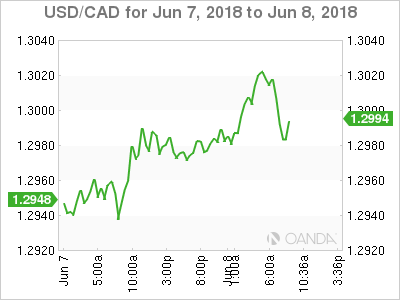 USD/CAD ratio is almost unchanged in the Friday session. Currently, long positions have a majority (63%), indicative of USD/CAD continuing to move higher.