HomenewsNewsUSD/CAD Outlook Mired with Mixed Signals Ahead of Canada CPI

USD/CAD Outlook Mired with Mixed Signals Ahead of Canada CPI

USD/CAD holds a narrow range going into the end of the week, but updates to Canada’s Consumer Price Index (CPI) may fuel the recent rebound in the exchange rate as the headline reading for inflation is expected to hold steady at 2.5% per annum in July.

USD/CAD Outlook Mired with Mixed Signals Ahead of Canada CPI

Signs of static price growth may dampen the appeal of the Canadian dollar as it does little to alter the monetary policy outlook, and a batch of lackluster data prints may prop up USD/CAD over the coming days as it dampen bets for another Bank of Canada (BoC) rate-hike in 2018.

It seems as though the BoC will stick to the sidelines at the next meeting on September 5 after raising the benchmark interest rate in July, and Governor Stephen Poloz & Co. may ultimately tame expectations for an imminent rate-hike as ‘the possibility of more trade protectionism is the most important threat to global prospects.’ Even though the ‘Governing Council expects that higher interest rates will be warranted to keep inflation near target,’ the ongoing adjustment in U.S. policy may push the BoC to soften its hawkish tone ‘given mounting tradetensions.’

At the same time, developments coming out of the U.S. may also keep USD/CAD afloat as President Donald Trump now tweets that ‘money is pouring into our cherished DOLLAR like rarely before,’ and the Federal Reserve’s hiking-cycle instills a long-term bullish outlook for the exchange rate as Chairman Jerome Powell & Co. appear to be on track to deliver four rate-hikes in 2018.

Keep in mind, the recent shift in USD/CAD behavior may continue to materialize over the coming days as the exchange rate appears to be stuck within a downward trending channel, but the near-term outlook has become clouded with mixed signals as the Relative Strength Index (RSI) bucks the trend, with the oscillator threatening the bearish formation carried over from earlier this year.Sign up and join DailyFX Currency Analyst David Song LIVE for an opportunity to discuss potential trade setups! 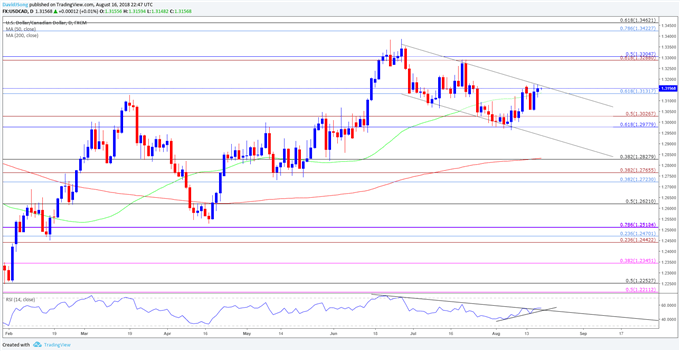 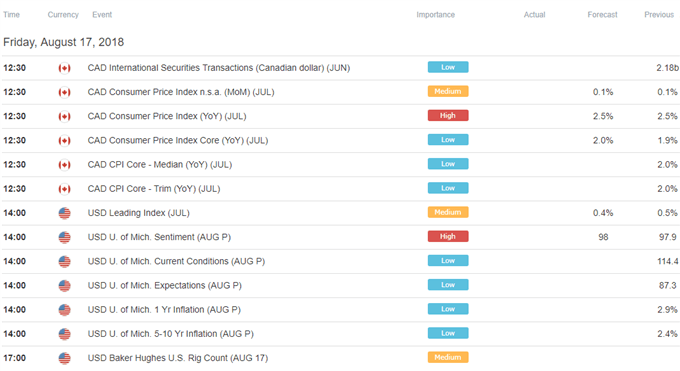