The Canadian dollar continues to lose ground, as the currency has posted five straight losing sessions. Currently, is trading at 1.2997, up 0.28% on the day. On the release front, Canadian dropped sharply, from 201,000 to 189,000, well short of the estimate of 203,000. On Wednesday, Canada releases , while the U.S. publishes and the U.S. Treasury Currency report, a semi-annual publication.

Traders are awaiting the U.S. Treasury’s next foreign exchange report, which was last released in April. In that report, the U.S. did not name any of its major partners as currency manipulators, but it did criticize China for the “non-market direction” of its economy. Since then, the Trump administration has imposed some $200 billion in tariffs on Chinese goods. China has retaliated with its own tariffs on U.S. goods, and there has been speculation that China could respond to the U.S. tariffs by devaluating the Chinese yuan, in order to bolster Chinese exports. In 2015 and 2016, the markets dropped sharply on fears that China would implement a major devaluation of its currency. The report should be treated as a market-mover.

Canada’s job numbers in September were excellent, but the Canadian dollar failed to gain ground on the strong data, which was released on Friday. The economy created 63,300 jobs in September, rebounding after losing 51,600 a month earlier. The unemployment rate dipped from 6.0% to 5.9%, matching the estimate. There was more good news as the country posted a surplus of C$0.5 billion. This marked the first surplus since January 2017. On Thursday, Canada releases reports. 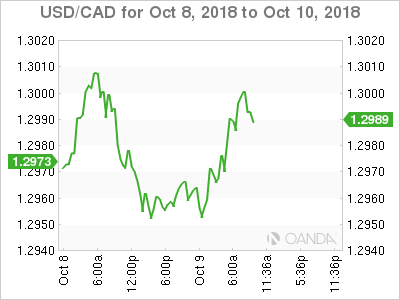 USD/CAD showed little movement in the Asian session. In European trade, the pair posted small gains but has retracted.